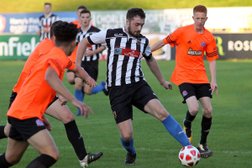 Mossley Association Football Club can confirm that forward Harry Pratt has joined the club on loan from National League North side Chorley.

Highly thought of at Victory Park, Harry joins The Lilywhites on a deal that initially runs until December 31st.

The 20 year old has frequently featured for the club's Development Squad this season, where his performances have impressed Chorley's U21 manager, David Chadwick.

"Harry is big and strong, with footballing skills beyond his years
"Harry has the ability to play for our first team, however he needs game time in competitive football first which is why I’m delighted that Mossley have taken him on loan."

Managers Peter Band and Lloyd Morrison will hope that the former Clitheroe man can quickly find his goal-scoring form to help propel Mossley into the top half of the Evo-Stik North table.

Harry will be in contention for selection for this weekend's home fixture with Brighouse Town (Kick-Off: 3pm).