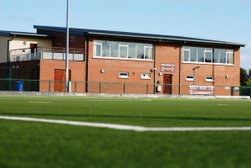 Mossley Hockey Club is a field hockey club based in the village of Mossley in Newtownabbey, County Antrim. It was formed in 1929 following a meeting of employees of Henry Campbell’s Mill in the village. The club currently fields five men's teams, with the first team playing in the Premier League of the Ulster Senior League. In 1994 the Club won a coaching award in recognition of its work with young players.

During the 1930s the Club enjoyed great success in the Intermediate and Junior League. In 1942 the first team won through to the Irish Junior Cup, but were on the receiving end of a 4-0 defeat by Pembroke Wanderers II. Two years later fortunes were reversed when Mossley won the Irish Junior Cup for the first time with a 3-0 win over Graiguenamanagh.

The First XI were promoted to Qualifying League B and Senior status was attained when that section was won in 1951.

The first Senior trophy final was in the Kirk Cup in 1953-54, when defeat was suffered at the hands of Lisnagarvey by 2 goals to one after extra time.

The First XI were beaten in the Ulster Final of the Irish Senior Cup in 1964-65 by Portrush.

In 1966 the Second team won the Irish Junior Cup with a 4-0 win over the Catholic Institute II, Limerick.

The Anderson Cup was won by the First XI in 1966-67 and the following season promotion was gained to the top section of the Ulster Senior League. This position would be held until the end of 2002-03.

The Second XI were successful in the 1986 Irish Junior Cup defeating Banbridge Second XI in the Final. The team was captained by David McKinstry, who was also a member of the 1966 Cup winning team.

The original grass pitches at Mossley were abandoned in 1976 and the Club played home games at the City of Belfast Playing Fields at Mallusk. The present site at The Glade was purchased in 1984, and in 1991 the Club installed a synthetic surface. In 2004 the original artificial surface was replaced with a water based pitch.

In 1952 the first International honour came to Mossley when Bryan Gilroy was chosen to play for Ireland. Harold Burns Jnr made his debut in the First XI in 1969 and was the second member of the Club to gain full International honours in 1978. Paul Cooke made his first appearance in the Irish Squad, along with two other Club members David Gordon and Richard Willis in 1985. John Jackson, a former member of the club, recently achieved his 200th cap for Ireland.