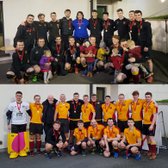 It was double cup success for Mossley Hockey Club at the Junior League Cup finals day at Stormont over the Chirstmas break. The 2nd XI claimed the Junior League 2 Cup and the 3rd XI the Junior League 3 Cup in a successful day for the Newtownabbey club. It took penalties to decide the winner in the 2nd XI final against Bangor 2nd XI with the score level at 5-5 in normal time with Simon Todd scoring four and Ryan Lyall adding one. Mossley won the shootout 4-2 to claim the trophy. In the 3rd XI's final it took a late goal from Jordan McCrea to win the tie against Newry 2nd XI in a closely contested encounter.

League action returned for the New Year and the 1st XI kicked things off hosting North Down on Thursday night and they notched up a 4-1 win to jump to the top of the Ulster Premier League table. Mossley enjoyed the better share if possession and chances but could not get on the score sheet with the match goalless at half time. In the second half Mossley found their form and took the lead with Jordan Robinson scoring. North Down replied from a penalty corner against the run of play but Mossley rallied and scored two in quick succession to deny North Down any chance of a come back, Robinson got his second and Ryan Lyall found the net with a sliding finish. Mossley secured a definite 3 points soon after when Robinson got a hat trick with a close range finish.

The 2nd XI came away 5-3 winners against Queen's University 2nd XI with goals from Simon Todd x2, Colin McLean x2 and Ricky Lee. The 3rd XI held on for a 2-1 win against NICS 3rd XI with goals from Mark Lee and Josh Tyrrell. The 4th XI picked up three points on the road to Newry 2nd XI with 3-2 win courtesy of goals from Joe Wray, Robert Tyrrell and Alan Russell. The 5th XI lost out 3-0 to Lisnagarvey 6th XI at The Glade.