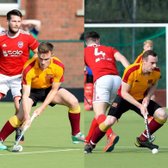 The 1st XI welcomed Cookstown to The Glade on Saturday afternoon for their second Kirk Cup group fixture of the season. It was a tightly contested affair, with very little to separate the two sides, with some good hockey being played by both teams. Cookstown took the lead from a penalty corner, but the home side did not take long to respond. Adam Monahan got the vital touch off a Jordan Robinson drag flick to level the game at 1-1 going into the half time break.

In the second period Cookstown converted two penalty corners to take the score to 3-1. Mossley battled back and Aaron Boyd got on the end of a cross to reduce the arrears to 3-2. The home side pressed in the final minutes but were unable to find the equaliser, with the game finishing 3-2.

The rest of the club were in action in their respective Junior League Cup competitions. The 2nd XI lost 6-2 against North Down 2nd XI with James Cochrane and Colin McLean scoring. The 3rd XI won 2-1 at home against Lisnagarvey 4th XI with Ian Creighton and Alan Russell scoring. The 4th XI had a tough day on the road to South Antrim 3rd XI losing 6-0. The 5th XI came away 2-1 winners against Raphoe 3rd XI with Niall Darrah and David Monahan getting the goals.