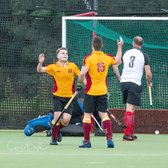 The 1st XI took on Raphoe in their opening Ulster Premier League fixture of the season on Saturday at The Glade. From the start it was the home side who dominated the match with the lions share of possession and were unfortunate not to take the lead with a number of early chances calling the Raphoe keeper into action. The Donegal side made the most of Mossley's missed opportunities and made it quarter time without conceding.

The second quarter started in similar fashion and the home side's pressure finally told when play down the left found Cody Walker in the circle who rounded his defender and slotted the ball into the side netting to give Mossley a well deserved lead. Unfortunately it was not to be plain sailing for Mossley as a rare foray into the Mossley circle for Raphoe saw them awarded a penalty corner which they converted to bring the match level at half time.

Mossley regained the lead in the 3rd quarter when Jamie Lyall produced a smart reflex finish at the back post but Raphoe soon replied with another penalty corner to pull level again.

Going into the final quarter Mossley's dominance had waned but hard work by the Glade Men gave them another opportunity and Simon Todd made no mistake with a close range finish to bring the match to 3-2. Mossley had to be resilient in the final stages as some I'll discipline saw them reduced to nine men but they rallied and saw out their first league win of the season.

The 2nd XI hosted Bangor 2nd XI and came away 3-2 winners with goals by Colin McLean, Nathan McCartney and Jack Taylor. The 3rd XI won 3-2 on the road to NICS 3rd XI with Josh Kerr, Ian Creighton and Jake Gordon getting the goals. The 4th XI fell to a 4-0 defeat away to Kilkeel 3rd XI.