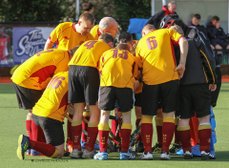 The 1st XI were in mid-week action in their opening Kirk Cup group match vs Belfast Harlequins and notched up a 5-3 win. The Club welcomed back Irish International Neal Glassey who has returned to his home club from Germany whilst they take their Winter break. Neal opened the scoring with Will Aston getting on the scoresheet and Joel Cathcart was prolific in front of goal with a well deserved hat trick. Mossley will need a win against EYHL opposition Annadale on Tuesday to progress to the semi-final.

The team returned to Premier League action at the weekend and made the trip to Donegal along with the 2nd XI to take on Raphoe. A fast start saw the Glade men take a 4-0 lead with Neal Glassey (2), Ross McIvor and Adam Monahan on the mark before Raphoe could reply. The second half saw Raphoe rally but Mossley added two more from penalty corners by Matt Anderson and Jordan Robinson to seal a 6-3 win.

The 2nd XI scored 7 without reply in a dominant performance against Raphoe 2nd XI. Leading 1-0 at half time it was a 15 minute spell at the start of the second half which did the damage as Mossley bagged 5 in quick succession and added one more before the final whistle. The goals came from Colin McLean (2), Nathan McCartney (2), Richard Lee, Rory Laverty and Charlie McLain.

The 3rd XI lost 3-1 vs Newry 2nd XI with skipper Mark Lee scoring. The 4th XI took a point in a 3-3 draw vs Bangor 3rd XI with goals from Gavin Weir, Joe Wray and Gareth Horne. The 5th XI lost 4-0 on the road to Lisnagarvey 6th XI.