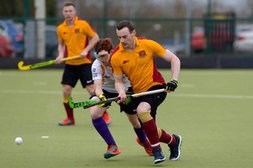 The 1st XI climbed to second spot in the Ulster Premier League on Saturday with a 2-1 win over Instonians at The Glade. Coming into the tie both sides were unbeaten in the league, with Instonians sitting on maximum points with four wins from four. Mossley began the better of the two sides and sustained their dominance throughout the first half. Going forward through midfield Mossley enjoyed extended periods of possession and multiple circle entries but did not do enough to convert their chances with the Instonians keeper Sam Brown putting in a man of the match performance. Mossley eventually broke the deadlock when Jordan Robinson converted a penalty corner drag flick into the bottom corner to give the Glade Men a well-deserved 1-0 lead. Instonians did enjoy spells of possession but the Mossley unit were disciplined in defence and the back line were in fine form to deal with the Instonians attacks.

The second half followed similar suit to the first half and Mossley were next to score the crucial goal, great work down the left flank by Neal Glassey found Ross McIvor who picked out Aaron Boyd's late run to the circle who fired home with a slick finish on his reverse to double the home side's lead. Instonians did rally and started to test the Mossley defence and pulled one back with Dane Ward scoring. In a high paced finish Mossley had further opportunities to extend their lead but could not add to the scoreline before the final whistle. For their performances Matthew Steele and Aaron Boyd shared Man of the Match.

The 2nd XI hosted Dublin side Rathgar 2nd XI in Round 1 of the Irish Junior Cup on Saturday and notched up a 5-0 win. Mossley put the match out of sight in the first half with goals from Colin McLean, a brace from Simon Todd and Neil McCracken who finished off a fantastic counter-attack. Colin McLean netted his second and Mossley's 5th with a penalty corner drag flick in the second half to seal the win.

The 3rd XI lost out 5-4 to South Antrim 3rd XI in a close match at The Glade, unfortunately a brace from Captain Mark Lee and goals from Jordan McCrea and Josh Tyrrell weren't enough to salvage any points from the tie.

The 4th and 5th XI fixtures fell foul of the weather on Friday night and we be rescheduled for later in the season.