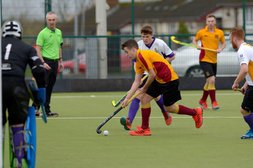 Mossley climbed to the top of the Ulster Premier League on Saturday following their 5-1 win over Northern Ireland Civil Service.

On the road to Stormont Alison McNeill's side got off to a good start and showed plenty of threat in attack. NICS looked dangerous with the ball but the Mossley defence did well to stop any early chances for the home side. Mossley took the lead when Jordan Robinson scored with a well executed drag flick from a penalty corner. Mossley doubled their lead when Robinson found the net again from open play. In the ascendancy Mossley started to open up their play and tested the NICS keeper who had a fantastic match but Mossley extended their lead to 3-0 with Ryan Lyall scoring before NICS could reply, making the most of a turnover in the Mossley half.

Mossley took their 3-1 lead to the half time break and took some time in the second half before they could add to their tally. Simon Todd was next to find his way on to the scoresheet when he latched on to a loose ball in the NICS circle to extend Mossley's lead. The Newtownabbey side added their fifth and final goal with Simon Todd on the mark again to finish from close range.

The 2nd XI won 3-1 on the road to Annadale 3rd XI with goals from Colin McLean, Charlie McLain and Ricky Lee.

The 3rd XI picked up three points with a 3-2 win over Cookstown 4th XI with a brace from Mark Lee and Darren Haveron picking up one.

The 5th XI lost 3-1 on the road to CIYMS 2nd XI with Saul Anderson picking up the goal.