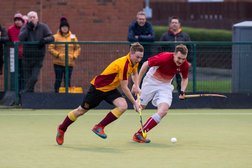 Unbeaten weekend for The Glade Men notching up 4 wins and a draw!

Mossley 1st XI maintained their unbeaten record in the Premier League on Saturday with a 3-1 win over Queen's University Belfast which keeps them in top spot in the Ulster League.

In the opening exchanges Mossley looked the more threatening side and swift attacks through midfield by Aaron Boyd and Neal Glassey kept the Belfast side's defence busy. Mossley earned themselves a series of penalty corners but couldn't make them count and Queen's proved to be a threat on the counter attack making good use of the aerial ball. Eventually Mossley took the lead with Ryan Lyall finishing off a flowing attack and rounding the keeper to slot the ball home. Advancing into the circle Neal Glassey doubled the home side's lead with a powerful strike.

Mossley were soon to regret those missed chances when Queen's scored from open play before half time to keep themselves in the tie.

In the second half Mossley continued to work well with the ball and defended strongly. A swift counter by Mossley found Ross McIvor who shot from a narrow angle on his reverse to beat the Queen's keeper and restore Mossley's two goal advantage. Mossley survived a late rally by Queen's to keep their 3-1 lead and take all three points from the match.

The 2nd XI hosted Portadown 2nd XI and came away 5-2 winners with goals from Colin McLean (2), Ricky Lee, Nathan McCartney and Tim Moreland. The 3rd XI edged out Kilkeel 3rd XI with a thrilling 5-4 win coming from 4-3 down with 6 minutes on the clock with goals from Mark Lee and Jordan McCrea who picked up two each and Alan Russell also on the scoresheet. The 4th XI won 4-1 against Lisnagarvey 5th XI with goals by Jordan McCrea (2), Louis Legret and Joe Wray. The 5th XI travelled to Bangor 4th XI and took a point with a 0-0 draw.