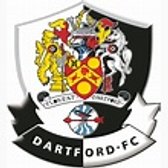 Tomorrow we welcome Steve King and his Dartford team to Arbour Park in an eagerly-awaited match, writes Neil Baker.

Dartford come into the game in fantastic form having won their last five league games on the bounce. This is extremely difficult to do in the National League South, however it is no real surprise with Steve King at the helm, as his record at this level is second to none.

They now sit in the play-off places, and with the size of the club and team they now have you would expect them to make the top seven.

Having Wednesday’s game at Havant & Waterlooville called off for a waterlogged pitch was a blessing in disguise for us as we had injury concerns going into the game with Warren Harris (hamstring), George Wells (glute) and Mark Nisbet (knee) all of whom would not have played, and then we were also going to be missing Ben Harris and Max Worsfold.

George and Warren should both be fit for the weekend after working with Alex last night at training, and even Mark Nisbet is coming along nicely, and could be available in the next two weeks.

It also means that Max and Ben Harris will both be available and we also have Guy Hollis back from suspension, meaning we can let Joe Grant return to Hartley Wintney and still name a squad of 16 for the first time in a long time.

We will therefore choose from the following 16-man squad: