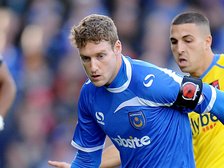 Slough Town are delighted to announce a second signing of the summer in centre forward Ryan Bird, who joins from Maidenhead United.

Ryan joins Slough Town off the back of a frustrating season where a few injuries held him back, but he is now fully fit and determined to hit the ground running with the Rebels.

In his previous season in the National League with Dover Athletic he was a regular starter and contributed 16 league goals, and this followed a career in the Football League where he played for Portsmouth, Yeovil Town, Cambridge United and Newport County.

He is a local lad who knows several of the Rebels players well, and we have no doubt he will fit in to our dressing room straight away. It is felt that his experience and physical presence will only strengthen the squad further as Rebels look to build on a decent first season at this level.