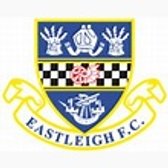 Pre-season gets under way with a goal fest

The Rebels began their pre-season campaign at home but fell short in an exciting seven-goal thriller on Tuesday evening, writes Jakub Wojtasik.

It was back and forth action at Arbour Park as Slough Town suffered a 4-3 defeat to Eastleigh.

Rebels new signing Max Worsfold got off the mark with his new team with a goal, and half time substitutes Warren Harris and Daniel Roberts helped the home team find their rhythm and played a crucial role in Slough’s efforts to overcome the Hampshire side.

But it was trialist Goddard who orchestrated Eastleigh’s impressive performance as he ended his evening with a goal and an assist.

Eastleigh were first on target with half an hour played, Joe Partington taking advantage of a mistake from Worsfold. The Rebels debutant was caught in possession, gifting Partington the ball on the edge of the box, leaving him alone to slot the ball past goalkeeper Jack Turner.

It didn’t take long for Eastleigh to double their lead. Just 90 seconds after conceding, Slough were dealt with another blow as Goddard broke free and was able to drive at the Slough defence. He played Eastleigh youngster Sam Smart a wonderful ball, and he was then able to convert a 15-yard strike, driving it inside Turner’s far post.

The Rebels showed character and got a goal back in the 41st minute, with Worsfold scoring his first goal for his new team. He met Matt Lench’s cross from the left flank, bringing the ball down and getting away a shot on goal which was deflected, but it proved to be enough to beat Eastleigh goalkeeper Ross Flitney as the ball looped over him into the net.

Slough questioned referee Sunny Gill twice after he ruled two of their goals offside. The first came from Francis Amartey after the ball took an unfortunate deflection off teammate Ryan Bird, leaving Amartey behind the last man and without a goal to his name. The second came from a cross which was met Guy Hollis’s header, but left Bird offside and his attempt on goal from close range was later disallowed.

The home side came out into the second half full of energy, testing the Eastleigh goalkeeper several times in the opening 15 minutes with Bird and Ben Harris seeing their efforts denied. The Rebels finally got the better of an organised Eastleigh defence as captain Mark Nisbet’s right foot met Lench’s corner to put it past Flitney at the near post with an hour on the clock.

Slough continued to threaten Eastleigh with crosses and well organised set-pieces which proved to be a key strength for the side managed by Jon Underwood and Neil Baker.

However, their efforts were soon brought to a halt as Eastleigh regained the lead in the 68th minute thanks to Goddard’s powerful shot from close range.

Eastleigh however wouldn’t give up - they showed their fight and found the gap in between the Rebel defenders to deal the killer blow in the final minutes of the game. Forward Clement ensured the win for his team when he was played through on goal, and he beat Turner leaving the goalkeeper to pick the ball out his net for fourth time.

But Slough gave the 374 fans at Arbour Park plenty to get excited about as they will look forward to meeting Sutton United on Saturday and continue their pre-season preparations.