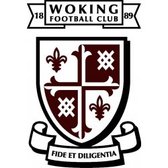 House of Cards tumble down

Francis Amartey’s first-half goal proved enough for Slough to claim their first win at Kingfield since March 1993, toppling the league leaders in front of over 2,500 in the process.
The early stages were dominated by Woking, who looked likely to score within the first two minutes; recent signing Kieran Glynn weaved his way into space and fizzed a cross into the box which was met by Jake Hyde, but he glanced the ball wide.
Woking controlled the ball for significant periods over the first fifteen minutes but did little in terms of carving clear-cut chances.
The 17th minute would see the Rebels create their first chance. Guy Hollis’ long throws caused havoc once again this afternoon, with Mark Nisbet almost opening the scoring with a header which was spectacularly saved by Craig Ross.
The Rebels would however score just three minutes later, following a move started with another Hollis throw-in. The Woking backline struggled to clear the throw with the ball falling to Lee Togwell, who sent in a brilliant ball to find his brother Sam Togwell. His cushioned header fell into the path of Amartey, who poked home via a post and wheeled off in celebration with the travelling fans.
The remainder of the first half saw few clear-cut chances created, the most noteworthy was for Woking as Max Kretzschmar’s effort from inside the box was blocked by George Wells.
With Woking a goal behind and Torquay United level with Concord Rangers, the hosts knew the onus was on them to find a goal, and just a minute into the second half the hosts won a corner. The out-swinging delivery was met by Ben Gerring - who netted the winner the last time the sides met - however his effort was off target this time.
Slough would win a free-kick on the left wing in the 53rd minute. Matt Lench’s floated cross found George Wells unmarked in the box but his glancing header flew wide of the Woking goal.
Woking went on to put Slough under sustained pressure, but the Rebels’ back line was equal to it with Josh Jackman ushering Reise Allassani out of play and Nisbet putting in a succession of crucial blocks.
It would not be until the 83rd minute that Slough would have a clear sight of goal once again. Amartey broke through the midfield and spotted Manny Williams free in the left channel. Williams took the ball to the edge of the box, but his effort ballooned over the bar.
Just minutes later Lee Togwell weaved his way through the Woking defence to reach the by-line, but his drilled cross evaded everybody within the goalmouth as the Cards narrowly kept their chance of a result alive.
However, those hopes of a result did not materialise as Slough kept Woking at arm’s length and held on for all three points, with Amartey’s first-half goal being the difference