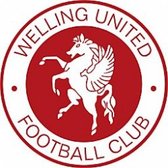 Can Rebels still make the play-offs!?

A scintillating strike from Billy Clifford in the second-half was enough for Slough to extend their unbeaten run to seven games.

The first half began at a slow pace and largely continued in that vein. The only notable save of the half was by Welling goalkeeper Daniel Wilks as Thierry Audel’s clearance span behind him, forcing the goalkeeper to act.

Despite a distinct lack of chances, Slough largely dominated the tempo of the game with the likes of Clifford and Matthew Lench often sending through Warren Harris, George Wells and Josh Jackman into crossing positions.

As the half came to a close, the Rebels went agonisingly close. After some nice build up play, the ball fell to Wells in space, but his drilled effort took a deflection off Simon Dunn which saw the ball bounce just wide.

At the break, it was clear Slough were on top, but both defences were holding firm limiting any clear-cut goal scoring opportunities.

Slough would go close once again just five minutes after the restart as Clifford’s backheel sent Jackman into space near the by-line. He threaded the ball through to Lench, who shot but hit the side-netting.

It was always going to take something special to break the deadlock in this game, and Clifford’s 72nd minute strike was just that.

Audel cleared a Lench corner only as far as Clifford, who took a touch and fired his effort from 25 yards into the bottom corner past Wilks to put Slough ahead.

Welling made very little in terms of clear-cut chances, which is a testament to the defensive work of Mark Nisbet and Sam Togwell. The Wings’ one real chance game in the 81st minute as Danny Mills found himself faced with Jack Turner at the near post, but his effort was tame and an easy save for the goalkeeper.

Slough were able to comfortably see out the remainder of the game to take all three points. This result leaves the Rebels within three points of the final playoff place with three games remaining in the National League South