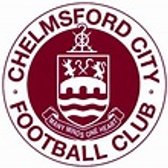 Rebels go 2nd in table with 9th win in 11 games

Ben Harris scored twice as Slough Town made it four wins out of their last five league games – and nine in 11 – after defeating Chelmsford City 2-1 at Arbour Park on Saturday.

The Rebels move to second place in National League South after a challenging match against the mid-table Clarets, who piled on the pressure in the second half and will feel unfortunate to have left empty-handed.

Slough, missing Guy Hollis and Lee Togwell, lined up with Ryan Bird partnering Sam Togwell at the heart of the defence, with Matt Lench only able to take a place on the bench.

In a well-battled game between the two sides, it was Chelmsford who had the first opportunity. After just four minutes claims for a penalty were raised by the Chelmsford players after their man went down easily under slight pressure, but the referee was not interested.

The tables quickly turned, as Slough began to attack and control the game more and more. With eight minutes on the clock goalkeeper Carl Pentney was left in two minds as to whether to come or leave an incoming corner, which gave Ben Harris the opportunity to tower above everyone and head the ball goal bound. If not for a lucky deflection it may have been going elsewhere, but it nestled in the net and was given to the Slough man.

Slough were eager to get another goal, and just two minutes later Dan Roberts cut onto his left foot to shoot from the edge of the box. It would have been a well-placed goal, but it went just past the keeper’s left post; unlucky. The visitors, however, were not going to be put off by the goal and began to push higher up the pitch to get the equaliser.

Shaun Jeffers almost replicated Roberts’ shot moments before, cutting onto his right foot and curling the ball towards the goal from the edge of the box, but this time it hit the post. The shot had Jack Turner beaten and would have been a great goal to silence the Slough crowd.

The game was a feisty one, and Scott Davies was the first player to be yellow carded after a poorly timed tackle. And Jack Turner went down just minutes later holding his face after a collision at the back post with Jeffers, but luckily the Rebels stopper was able to continue.

Ben Harris was on top form all game, and after a weak pass back to Pentney from Anthony Church, he sprinted to retrieve it and knocked it past the keeper, only to be brought down. Slough had a chance to double their lead from the penalty spot.

Pentney was booked and Ben Harris stepped up to send the keeper the wrong way and add his second of the game, giving Slough a healthy half time lead.

After the break, Chelmsford came out all guns blazing and took Slough by surprise by scoring just three minutes after the restart. Jeffers got the ball on the right and ran from the half-way line, Sam Higgins followed the wide man into the box and was free to head the cross past Turner, who got a touch on the ball.

The visitors were now only one goal behind and posed an ever-increasing threat. From this point the ball went from one side to the other, with few goalscoring chances coming - until the 70th minute, when Higgins popped up again in the box, but this time headed the ball over the bar.

Slough fought to defend their lead, with Chelmsford throwing everything they had at the Rebels.

And the visitors almost scored with the last kick of the game, when a loose ball for the Clarets in the box, but the desire from Slough shone through as four players threw their bodies at the ball to keep it out. Captain Sam Togwell and then George Wells put in heroic blocks to deny a certain goal, ensuring all three points for the Rebels as the final whistle sounded moments later.

This was a great defensive performance from a patched-up Rebels side, whilst Chelmsford will feel frustrated with the outcome. Slough will want to take these good current performances into next week’s game at third-placed Havant & Waterlooville.