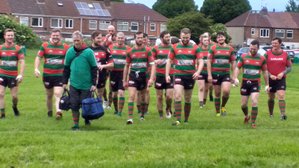 Warriors do double over Raiders

After the week’s deluge of rain, the Warrior Faithful queuing up Cranbrook Avenue to get through Jo Marrazza’s single turnstile…well…gate, would have been forgiven for thinking this match may turn into something of a mud-bath. In fact, the clever tactic of allowing the grass to grow a little above normal length meant it had sucked up all the water and there was barely a spatter of mud to be seen. With several members of the squad either injured or away watching a popular beat-combo of the day at some sort of musical concert, Head Coach Dave Wray had to ring the changes. Nevertheless, Myton completed a double over the Raiders in a game where, apart from perhaps the first fifteen minutes, they looked comfortable, with the visitors, at times, being their own worst enemies.

The Warriors kicked off and were almost immediately handed a leg up by an early knock-on from the Raiders. A steady first set ended with a clever Ryan Walker kick. “Basil,” was filling in at half-back in place of brother Kris (rumours that this was due to a head injury caused by a heavily applied thumb were dismissed as just a malicious rumour by Myton’s coaching staff), and his kick saw the Raiders scrambling to get out of their own in-goal area. They succeeded, but only just, thanks to Liam Price’s tackle which pinned not only the Oulton player, but also the referee, to the post. Thankfully, Myton’s very own sex-kitten and physio Norman Pidd was on hand to apply the magic sponge to the Ref’s poorly leg and the game continued. For the following fifteen minutes or so the game was pretty even. Oulton’s MOM Dom Flanagan was causing havoc down Myton’s right with his strong running, though Myton debutant Brandon Richards did well to chase back and bring him down despite conceding…well…tons! Myton were, worryingly, beginning to miss some tackles allowing Oulton to stamp some authority, though it’s fair to say that though first impact was being missed, the scrambling cover was doing its job. Not everyone was missing tackles though; Liam Welham was, as usual, displaying his freakish strength and the return of Jimmy “The Human Dynamo” Jennison saw him also getting some shots off despite carrying the injury which had seen him miss last week’s trip to Saddleworth. Myton were absorbing the early pressure, Joe “Sicknote” Dewsbury taking a tricky catch under his own sticks and then racing away for a 20-metre tap to make good yards. I say racing…well…you know what I mean. Myton steadied the ship and Ryan Walker’s kicks were beginning to pin the visitors in their own territory. When they knocked-on in trying to bring one of them back, The Warriors took full advantage. From the resulting scrum, John Hobman fed Ash James who powered his way over to score in the corner and converted his own effort from the touchline.

The re-start from Oulton went straight out behind the sticks, so Myton were immediately back on the front foot. They weren’t able to score straightaway, but it wasn’t too long before they crossed again though, ironically it came from an Oulton attack. Finishing a set close to Myton’s line with a grubber kick, Andy Oades intercepted with his feet, picked up and started to run. Wisely, he realised that Lee James may have a better chance of making more yards , so quickly fed the winger who raced away in a style reminiscent of Ratu Naulago (he told me to say that) to go a full 80 yards to score, again goaled by brother Ash. With a 12-point cushion, Myton now began to dominate. Dave Brooke’s introduction saw him inject his usual “off-the-cuff” enthusiasm. He also entertained the Warrior Faithful with a highly effeminate sounding “OOOOHHHH” when subjected to a high-ish tackle, though it was enough to gain him a penalty. The pressure built, and this time it was Coaches’ MOM Ash James’ kick that pushed the Raiders back in to their own in-goal area, and it was players’ player Ryan Walker’s tackle that kept them there to force the drop-out. Liam Welham went close, being held up on the line and another Dave Brook sneak saw him stopped just short. Myton’s defence had now stiffened up, forcing their opponents to kick from deep and the returning Liam Bowler along with Aaron Pearce ran it back with gusto. When Oulton did threaten, Lee James took a good catch on his own line and, though forced to concede a drop-out, Myton stood firm. They then stretched their lead shortly before half time. A break from Liam Welham saw him skittle tacklers, leaving them in his wake. With support from Liam Bowler on his inside and Brandon Richards on his outside, he opted for the fleet feet of the latter, the youngster racing away to score an unconverted effort in the corner. The half ended with another strong Joe Dewsbury carry and a set of happy faces among the Warrior Faithful.

Jimmy Jennison did well to take a tricky kick-off at the start of the second period and, soon after, Mike Ward (moving from his regular wing spot this season to replace the injured Adam Piggott at full-back) also had to be on his toes to cover a tricky Oulton kick on his own line. Nick Halstead showed off his trademark strong carry and fend to bring the Warriors out from deep, and Ash James showed off his dancing feet and snazzy underpants when tackled by a desperately hanging on Raider. Twins John and Alec Hobman had the visitors thinking they were seeing double when they combined in the tackle and Rich Dunham’s reintroduction and carry sparked a period of the game the opponents would probably prefer to forget. At the end of his carry, he was unceremoniously tipped and awarded a penalty. Oulton’s Danny Stanley was overly vocal in his remonstrations and was asked to sit this one out for ten minutes by the referee. Myton took full advantage and Ryan Walker once again showed his kicking skills with a perfectly placed grubber into the corner (or “the Amazon” as that “grassy” corner of the field had been nick-named) to give Lee James the simple task of touching down for another unconverted effort. As if one sin-binning wasn’t enough, the clearly frustrated Raiders then lost another two players after another altercation with Rich Dunham. Once again, the prop was bulldozing his way out of defence when Andy Tillet “ran in” in a fashion not welcomed by the official. He saw yellow and when Henry Hiddleston suggested that the referee may have made an error (though he may not have used those exact words) he too was asked to leave the field for a few minutes. Despite their opponents being (briefly at least) down to 10 men, The Warriors weren’t able to take advantage, though another Liam Welham break this time put John Hobman away. Perhaps confused by the prospect of having clear space and the try line beckoning, this Hobman twin decided to run at the only possible tackler and stop. The play broke down, and from the play the ball, an outrageous Dave Brooke dummy and spin didn’t quite do the trick. However, on the next tackle the ball was fed to Alec Hobman on a short ball from Ash James and this Hobman twin found the gap to pick up not only a try but, no doubt, bragging rights over his brother for the next few days. Ash James’ two-pointer saw Myton effectively kill off the game, though a late Chris Smith try, goaled by Josh Murray got the visitors on the scoreboard. The real highlight of the last few minutes was the arrival at pitch-side of Ben Bradshaw who, in a great effort, came to cheer on the lads despite only leaving hospital half an hour earlier! After two weeks in hospital and one sternum operation, it was great to see him, and his teammates wasted no time in welcoming him back by taking the mickey straightaway!

Speaking after the game to a packed press cordon at the Myton Media Centre (aka clubhouse), Head Coach Dave Wray was a happy man.

“We spoke in mid-week about keeping the errors and penalties down and we really did well in those departments,” he said. “That’s probably the biggest side we’ve played, but we stuck at our defence and I thought the kicking game from our halves was outstanding. We’ve had to make a lot of changes but the lads who’ve come in have really contributed.”

For Full results and the league table, follow the links below.