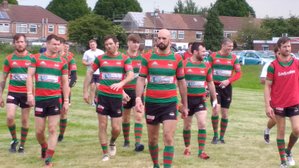 Strong showing from the Warriors but not the match reporter

Before we get into the details of the game, we should start with an apology to the regular readers of this drivel (yes…all three of you) for the late appearance of this week’s report. Many excuses could be made, but let’s just say that on a day spent watching magnificent wins for both Myton and Hull FC, this correspondent had celebrated a little too vigorously and was unable to fulfil journalistic obligations. One top tip from painful experience….if you are going to fall over on a concrete path, don’t try to use your face to soften the blow, or cover the brand new jumper the wife had lovingly bought you and that was being worn for the first time, in blood. And tear a hole in it. Remember kids, drink responsibly.

Anyway, to the game and Myton lined up with a side containing four Liams and on a pitch delightfully mowed, but surrounded by grass so long that, when Darren Hoggard went to collect the ball after a conversion, you could only just see the top of his head! (Please enter your own height related jokes here). Indeed, when Ryan Walker completed the first set with a kick that went dead everyone concurred that “we shouldn’t have cut the grass.” The first quarter of the game was pretty even. Both sides were exceptionally tidy in completing their sets and mistakes were being kept to a minimum. Riley “The Fringe” Anderson got in a couple of big hits and Alec Hobman snuffed out a half-chance with a fine smother tackle. Brandon Richards – switched from the wing last week to full-back this week - started strongly and showed some nifty dancing footwork to take a quick tap and make ground, though got a good clattering at the end of his run. Thankfully, the youngster dusted himself off and went on to win both the players’ player and coaches MOM awards for the day. Dan Spencer also showed good feet to break through and feed Lee James, who kicked forward on the run and forced a repeat set. Most of the game was being played in the middle third of the pitch as neither side managed to dominate territory, but some more excellent kick returns from Brandon Richards saw Myton begin to get on top. The home side took the lead on 11 minutes after a superb handling move featuring Liam (1) Welham, Nick Halstead and Ryan Walker before Liam (2) Bowler crossed the whitewash to round it off perfectly. Ash James converted. From the restart, Aaron Pearce and Riley Anderson led the charge, and starting hooker Dave Brooke was his usual effervescent self, probing from dummy half. It was 16 minutes before Myton made their first error – a knock-on - but even that was slightly harsh,as it could easily have been given as a ball steal. Nevertheless, Liam (3) Price came on to lead the charge with another strong carry and Liam Welham hit St. Pat’s Charlie Mitchell with a tackle so solid, he probably wished he had run at someone else. The Warriors weren’t having it all their own way however, and St Pats first forced a drop-out and then pressured down Myton’s right, Liam Bowler reading the play well to jump out and smother the initial threat. The visitors then spread the ball to the left and Joey Meninga forced his way over in the corner, Dan McGoldrick adding the extras as the game entered the 23rd minute. Myton brought on Rich Dunham to bolster the pack with his rumbling carries and he combined with Liam Price for some “stone wall” tackling. The game was still evenly balanced as the half hour mark came and went, but the Warriors then turned on the gas with two tries before the interval. First Liam (4) Ward darted and ducked under the covering tackles to score from close range. Then another superb piece of skill that came straight from the training ground saw Ryan Walker feed Ash James whose quick inside pass saw brother Lee burst through the gap to score his first of the day. With Ash having converted both tries, the Warriors were 18-6 up at the break.

Into the second half, and it started with Andy Oades getting in a couple of strong early carries from deep, but the visitors had the best of the early exchanges with Riley Anderson and Liam Welham again making big tackles. It took a trademark Dave Brooke break to relieve the early pressure, and on 46 minutes the Warriors stretched their lead. Ash James put up a towering kick, chased by Liam Welham who rose imperiously to pluck the ball out of the air before feeding back inside to the kicker, Ash racing away to score under the sticks and give himself a routine conversion. Three scores up, and the Warriors were looking comfortable - so comfortable that Dave Brooke decided to show off his outrageous dummying skills. Sadly, his opponents didn’t buy it - mainly because there was absolutely no-one outside him, or indeed anywhere remotely near him! When St Pats’ benefitted from a 40/20 (which may have been somewhat generously awarded), they were able to quickly take advantage of the, still scrambling back, Myton defence for Ryan Braddock to score with McGoldrick again converting. It was only a brief respite for the visitors, as Myton were soon back on the scoring trail. As the Wigan side looked to kick on the last, the kick was blocked. Was it by John Hobman? The Warrior Faithful debated on the touchline, only to be corrected by the eagle eyed and incredibly well coiffured Norman Pidd who spotted it was Ash James who both blocked, then chased and picked up the ball, before shrugging off an attempted tackle to score and again convert his own effort. Rich Dunham bent down to pick up the kick-off and nearly tore a hamstring in the process before the Warriors made their way back up field to threaten once more. Dave Brooke attempted to smuggle himself over from close range; the ball broke loose and dropped in the in-goal area; was it a knock-on? Was it a ball steal? Lee James didn’t bother debating and touched the ball down. The referee and touch judge conferred; it was stripped and the try stood; Lee tried to claim it was a 90 yarder. Brother Ash hit the outside of the post and it was 34 – 12.

As the game entered the final quarter, Myton stretched their lead. Another passage of excellent running and handling saw Liam Welham hit the gap and there was no stopping him as he burst clear to score, Ash James converting. At 40 – 12 up it is perhaps understandable that a team takes its collective foot off the gas. Certainly there were signs that a little complacency may have been entering the equation. A mis-placed pass saw a highly amusing Lee James swallow-dive in attempting to keep the ball in play. It gave the visitors a sniff of an opportunity and they scored from a cross-field kick collected and put down over the line by Luke Warburton for an unconverted try. Myton bounced back. First Liam Ward made a superb break, the type of break from which he often scores, only to be thwarted by a fine cover tackle from St. Pats’ full back Jake Alder. The hosts weren’t to be thwarted however and scored when an Ash James break found Alec Hobman in support before he in turn fed Lee James to go in for his hat-trick, this one going unconverted. The light-hearted finish to the game saw Dave Brooke inadvertently provide the comic relief, first by his imitation of George Williams with a superb “ghost tackle,” missing his opponent completely, and then being plonked on his bum. The game effectively fizzled out as the Warriors then allowed their opponents to score a scrappy, unconverted try from Charlie Mitchell to end the game. It was a slightly frustrating finish to an, otherwise excellent, performance, but as Liam Welham later pointed out those are the little lapses in concentration that can cost in matches tighter than this one proved to be.

Nevertheless, it was a happy Head Coach Dave Wray who faced the gathered world’s media, before said media went on a seven-hour pub crawl round Beverley.

“It was a great performance from the lads today,” he said. “Our completion rate was excellent - really high, particularly in the first half and we scored some cracking tries.”

Myton now face a week off before their next fixture away to current league leaders Pilkington Recs on 6th July. It will give the players the chance to get over some knocks and niggles, and this correspondent two weeks to lose the scabs off his face!

For full results and tables, click the links below: