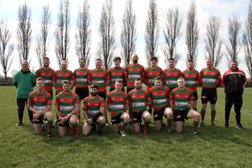 Myton got back to winning ways with a convincing win over Dewsbury Moor Maroons, just as they did in the home fixture earlier in the season.

Myton saw the welcome return to the side after injury of Jimmy Jennison and a mystery player…whose name shall not be mentioned in this report in case his wife-to-be finds out he was playing despite his broken hand probably not having fully recovered, much against her wishes. Thus, so as not to reveal his identity, we’ll just call him Kris Welham’s younger brother. Myton started slowly, conceding an early penalty and allowing the Maroons to dominate territory in the opening stages. They did threaten with an early breakaway, Aaron Pearce’s slick offload putting Adam Piggott away, but the fullback was unable to find Ellis Wray on the wing. Kris Welham’s younger brother put in a delicate chip but was just unable to get on the end of it himself. Youngster Matty Thomas put in some encouraging early carries and Andy Oades was not shy in looking for work, but when Myton gifted possession from a knock-on, they put themselves under pressure and Archie Bruce took full advantage for the home side to open the scoring. Max Vernon converted. Kris Welham’s younger brother went through a spell when he appeared to be the only Warrior making any tackles as Myton’s lethargy continued. That said Ellis Wray and Ash James did well to hold up one Dewsbury threat on the line. Jimmy Jennison’s introduction saw him make an immediate big-hit and Ellis Wray - who’d spent much of the morning suffering from a sickness condition known as “Ibiza Disease” -managed to stop throwing up long enough to carry the ball out of defence before retiring to the bench. Credit to him for stepping in after a late cry off.

The Warriors were doing some good things but seemed to follow them immediately by bad. For example, a period of some excellent Myton defence was followed by some soft tackling that allowed Aiden Ineson to break through to score, Vernon again converting. Two scores down, Myton then got a bit of luck that helped turn the tide. When Jimmy Jennison carried the ball into a collision, it looked like the opposition had forced a knock-on, but it was Myton who were given the decision. The home side showed dissent, so the Warriors were given a penalty. Kris Walker’s carry took them close and Liam Ward showed his usual spark, sneaking over from dummy half, Ash James conversion adding the extras. Nick Halstead added some steel to the defensive effort, but the mistakes kept coming, Myton’s attacking kick going out on the full. It seemed to be a catalyst however, as the visitors began to cut down on the errors and the performance stepped up a notch. Adam Piggott and Liam Ward combined to force a knock-on on the line to thwart one attack, and Ash James showed great vigour to kick/chase and tackle all in the space of a few seconds. Myton then drew level just before the interval when Liam Ward fed inside to Kris Walker, whose change of direction wrong-footed the defence before feeding Lee James to score. Brother Ash converted and the teams went for a much need drink of water all square.

Into the second half and the omens looked good when Kris Walker immediately found touch in goal. Myton were quickly on the front foot. Dan Spencer made a break; so did Sam “Rambo” Hoggard and the Coaches’ and players’ MOM Liam Ward threatened again. When the Maroons did break, Adam Piggott made a fine cover tackle, and with his full-back Out of position, Lee James did well to cover the Dewsbury kick through, though had to concede a drop out. A second drop-out soon followed but James “JJ” Johnson led the defence with a fine challenge, smothering his on-rushing opponent. The Warriors were beginning to get on top, much to the home side’s frustration and they began to concede penalties, before eventually being put on a team warning. Myton took full advantage of the gifted possession, spreading the ball from right to left before Adam Piggott dived in at the corner to put the Warriors ahead. The conversion from the touchline was missed but the wind was very definitely in Myton’s sails. On 59 minutes, they moved out further into the lead, another Liam Ward break being finished off by the supporting Dave Brooke who went in under the sticks to give Ash James another routine conversion. Two minutes later, The Warriors scored the try of the game. Liam Ward broke, fed Adam Piggott, he strode forward before slipping the ball to Ash James. With brother Lee in support, the stand-off executed the perfect draw and pass to give “Sid” the chance to race away unopposed over the last forty yards. Dewsbury Moor had given it their all, but the game was now getting away from them. Another Liam Ward break saw him off-load to Nick Halstead. He in turn found Matty Thomas. How he found him was a matter of debate. It could have been a fortunate spill of the ball backwards that just happened to land in the young prop’s hands, or it could have been a miracle off-load from a player of craft and guile. Either way, it didn’t matter as Thomas ran through to score his first try for the first team. To add their misery Moor’s second rower Bradley Adams was sin binned after complaining too much about something.
The Warriors were now dominant. One move went through so many pairs of hands it looked like the Haarlem Globetrotters had taken to the field. Ryan Walker showed strength in both attack and defence as the Maroons found the Warrior line unbreachable. The game drew to a close with Myton having the luxury of bringing off Kris Welham’s younger brother with five minutes to go for a well-deserved breather. At least he can tell his wife-to-be that he didn’t play the whole game!

Speaking to the gathered world’s media who’d not gone to see the multi-platinum selling Liquid Brick at “Moor Fest,” the home side’s charity festival in a field, Head Coach Dave Wray was reasonably pleased with the result.

“It was a workmanlike performance,” he said. “We got a bit smarter as the game wore – once we realised you can’t keep making mistakes and giving away penalties and still win, things improved drastically.”

For all the day’s NCL results and league tables, follow the links below: