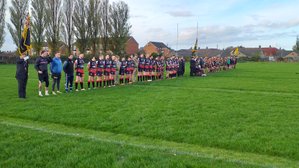 Myton take the spoils in the game, but Remembrance, of events both historic and recent, takes the fore in an emotional fixture.

As any regular reader (I believe there are at least 3 of them) of these match reports knows, the tone taken is usually light-hearted and, hopefully, this one will generally follow suit. However, it would be trite and disrespectful to kick off this particular piece of coverage without a making an observation of a more sober nature.

Remembrance can mean many things to many people. For me, it takes me to my grandfathers, one who fought in the trenches all the way through the First World War, and one who served in North Africa and into Italy in WW2. The fact that I knew them both means that they were among the lucky ones to come home, but we all know that thousands upon thousands didn’t. Each year when the old soldiers march past the Cenotaph, I think of my Granddads, the things they had to endure and the comrades they lost. For others, their memories may be of the many that lost their lives in conflicts that have followed: Aden, Korea, Northern Ireland, The Gulf, Bosnia, Afghanistan to name but a few. Anyone reading this will have their own personal recollections but, for some, remembrance will have taken on an entirely different meaning this year. This year’s game took on a special significance, commemorating as it did, the memory of SAC(T) Scott Stevenson who proudly served in the RAF and tragically lost his life at the age of 25 after being injured whilst representing the Air Force in a rugby league game against the Army back in September. Throughout the season, I write these reports merely as a fan, and not as an official spokesman for the club, but I’m sure I speak for many in the Club House today, who were deeply touched by the dignity shown by Scott’s family in attending today’s game, particularly his Mum who bravely thanked all present in an emotional speech. Impressive also was his team-mate, Tom Moor, who, without prior warning, was asked to speak about Scott and, off the cuff, did so with great eloquence after what has clearly been a dreadful time for all concerned. One can only imagine the thoughts that were going through their minds before the game when the bugler sounded the “Last Post” and a two minutes silence was impeccably observed.

Scott’s Mum commented on how the “rugby league family” had given her family a collective hug, so it seems appropriate to use that thought to move on to the actual game where, in fairness, there wasn’t much hugging going on. This was the sixth time this fixture has been played and started with the usual intensity. Myton kicked off and immediately benefitted from an early knock-on by the Combined Services to put them immediately on the attack. They played out the set, before Ash James kicked through to the in-goal and Liam Welham touched down to open the scoring on just 3 minutes. At least that’s what I was told had happened, as this reporter wasn’t actually looking at the pitch at the time, instead trying to work out how the camera worked on his mobile phone after a series of hopeless attempts at photography during the regular season. Ash James converted and it was game on. It’s always tricky for the Services, pulled together as they are for this game and thus unable to call on the familiarity of playing together regularly as most teams do. That said, Myton also were made up of players from the First team, A team and a smattering of under 16s, so it was credit to both sides that the quality on show was still pretty good. The Forces team responded to the early set-back with a spell of pressure, assisted by a Warriors’ knock-on when coming out of back-field. Sadly for the visitors, they were unable to capitalise and, on 11 minutes they were made to pay.

Now regular Myton watchers will know that Jono Douglas is renowned for many things but until today, blistering pace was not necessarily one of them. (To be fair, his fame is mainly ear related - indeed one of the favourite quotes ever from an opponent was aimed at him - “by ‘eck, them’s some lobes there lad”). However, cometh the hour, cometh the man, with the big forward breaking from deep in his own half, pinning back his lugs before bursting through tackles, handing off opponents and just about out-pacing the desperate attempt at a cover tackle to go all the way under the sticks for a superb try, converted again by Ash James. The joy of scoring was only matched by the look of horror on Jono’s face when Kris Walker caught the kick-off and immediately passed the ball to him to take the first carry whilst he was still reading the operating instructions for his portable oxygen tent! First carry completed, he left the field his, not insubstantial, ears ringing to the sound of rapturous applause for a fine score. His wasn’t the only fine skill on show, however. The Services’ full-back Danny Patrick did well to take a difficult catch under pressure to break forward and their eventual MOM Pete Holmes was a constant threat with his strong running. Indeed, it was Holmes whose break down the left touch-line left Myton players floundering in his wake before touching down to pull a try back for the visitors. Ben Pennington converted. It wasn’t long before the hosts were back on the front foot, however. Aaron Fewlass – great to see him back in a Warriors shirt even if it was only for a one-off appearance on this special day – drove the ball in hard. John Hobman flung out a pass to Ash James and his cross-field kick was tapped back by Dan Spencer before Liam Welham again struck with a simple touch down, Ash James again converting. The Forces XIII pressed hard to pull one back before the interval, at one point forcing a drop-out, and then threatening out wide, but Myton Winger Liam Frenneaux stepped in with an interception to quell the danger and see his team through to the interval.

As the cold began to bite, Myton started the half on top, but couldn’t immediately stretch their lead, with one or two handling errors creeping in thanks, probably, to a few freezing fingers. Alec Hobman’s rib injury didn’t help matters, but the Warriors turned the screw when Kris Walker’s grubber forced a drop out. From the resultant possession, the half backs – Messrs James and Walker playing for the first time in a long time without either of their siblings in the line-up – combined, the latter’s pass collected by Liam Welham who raced through to complete his hat-trick and collect Myton’s MOM award. Ash James converted. The Warriors took the opportunity to give three youngsters their first "senior" appearance, Kieran Masaeike, Liam Fox and Alfie Stanfors all acquitting themselves admirably. Then, on 64 minutes, came another contender for try of the game. Rikki Robinson’s running style could be described as…well…unique...and, as the old joke goes, his pace is deceptive (he’s slower than he looks). Nevertheless, he too burst forward down the left wing and just kept on going, eventually crossing for another superb long-range effort to score out wide. Having seen what happened to Jono in the first half, Rikki decided not to take the risk of being given the first carry from the re-start, deciding instead to go and help Jono pump up the oxygen tent on the touchline. It was the last score of the game, but one result was still to be settled. Myton’s skipper for the day, Mike Ward, himself only recently having left the army for a role back in Civvy street, was given the opportunity to swap sides for the second half and thus play against younger brother Liam, with his stated intention being “I’m gonna bang him!” It has to be said, by the final whistle, and depending on who you asked, it was either 2-0, 4-0 or 4-1 to Ward Minor. The game then finished with the spectacle of Liam Frenneaux, taking to the field after a spell on the bench, either with his shirt on back to front, or his head on the wrong way round, depending upon your perspective. It was a light-hearted way to end the game which, despite strenuous efforts from the Combined Services, saw the Warriors level the series at three apiece after a 28-6 victory.

With the game over, it was back to the club house for the emotional presentation and speeches described earlier, so it only seems appropriate to end with what was very much the essence of the day:

We Will Remember Them.