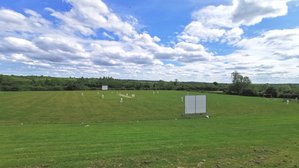 The visitors won the toss and put Napton in to bat.
On the same track that last week returned 550 runs from 80 overs, and with Napton’s batting line-up this week, great things were expected.

Opening batsman Mike N looked comfortable against the bowling, smacking a gigantic ‘six’, but narrowly missing out on a half-century.
Ed recorded a ‘six’ in the book, it being his first one in Sunday cricket for Napton, but again fell short of a really big score.
Tom did the gentlemanly thing and ‘walked’ on the ‘keeper’s appeal, although umpire nor anybody else heard the nick.
Stuart was getting in full flow but ran out of overs.
Napton completed their allocated 40 overs on:- 157-8.

Tea-rota duties this week were the responsibility of Vice-Captain Olly who was ably assisted by Jo Hancock.
After witnessing Olly’s do-it-yourself cricket teas during the pandemic, we half-expected a military field kitchen with Compo rations.
However, we were presented with a first-rate traditional cricket tea.
A delightful sponge cake that was so light it almost needed clamping to the plate was apparently made by Olly himself.
It was filled with cream and topped with cloudberry jam.
What is ‘cloudberry’ you may ask.
It is a creeping herbaceous raspberry with hints of raspberry, mango, apricot and passionfruit flavours, the cloudberry provides a new and exciting experience for your taste buds. Its red and orange colours match its vibrant taste, a culmination of sweet and tart.
If Olly did indeed bake this himself, he needs to be putting himself forward for one of the numerous TV cooking competitions.

Monks Kirby’s target was a tad under 4 per over.
The opening batsmen were not together long due to a remarkable one-handed catch taken low by Nick at gully off Stuart’s bowling.
Number 3 was bowled by Stuart before he could get into his stride.
The remaining opener was building up a decent score until Sam bowled him in the 17th over.
After 20 overs Monks Kirby were well on course with 91-3.

Tom and Ed led a wicket-fest assisted by catches from Sam and Stuart.
There was much excitement in the 35th over with Max taking the ball. The visitors having lost 8 men needed just 2 runs for victory.
Max hit the stumps with the first ball of the over.
156-9
A single came off the following ball which tied the scores and just one wicket needed.
Unfortunately for Napton, a boundary put Monks Kirby in the winners enclose.
161-9 off 34.4 overs.
Wicket takers:
Tom Hancock 3 overs 3-6
Ed Shillitoe 3 overs 2-23
Stuart Alsop 8 overs 1 maiden 2-24
Max Nyren 4.4 overs 1-32
Sam Sensecall 8 overs 1-43

Worth noting:- Napton only conceded 5 extras and Mike N, behind the sticks, didn’t let a bye get past him.
Perhaps if Napton were ‘chasing’, and with the batting line-up available, there would have been a different outcome.