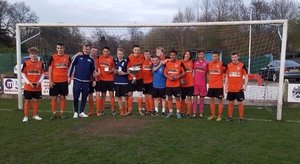 As part of our cup final preview ahead of the game on Saturday, we put some questions to more members of the U16 squad...

Ahead of the U16 cup final on Saturday against Tyldesley, we put some questions to members of the squad. In today's final edition, we meet Josh McRae and Aidan Duffy.

Name: Josh McRae.
Position: Midfield/Attacker.
Team I support: Manchester United.
Player I most resemble: Riyad Mahrez.
Favourite memory of the season: Two assists; one for Buzzer in the semi-final vs CMB; the other for Cam's header in the league game vs CMB.
Biggest achievement in football: Winning the JVC Tournament in Holland in 2013.

Name: Aidan Duffy.
Position: Midfield.
Team I support: Burnley.
Player I most resemble: Joey Barton.
Favourite memory of the season: Scoring an equaliser against AFC Blackpool for the Youth Team in the 101st minute!
Biggest achievement in football: Being involved with the Academy at Burnley for six years.

Thank you to all our U16 for their participation in the build-up for the cup final and good luck to them in their game against Tyldesley tomorrow.