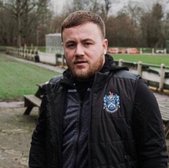 Mental health workshops could 'save a live'

Nelson FC manager Andy Harrison has said that everyone at the club has "suffered (mentally) at some point in the last 12 months."

Lockdown and COVID 19 in general has caused many to struggle. It's taken lives, jobs, hobbies and much more away from the world.

It's no different in sport, where the charity State of Mind are delivering free workshops for all North West Counties Football League (NWCFL) clubs to support players and coaches with their mental health.

What did the workshop cover and how did it benefit the lads and yourself?

"It was really good to be fair, I wasn’t sure what it was going to entail going into it, but they talked about their own experiences with mental health and how it affected them, which was eye opening and really quite sad to be honest, how they got through it and where they are now which was inspiring.

"They talked about friends and other sportsman who had been less fortunate to come through their challenging times and that wasn’t nice to hear, made you appreciate what you have I’ll be honest.

"One of the most important things though was they went through signs of mental health issues and how to recognise them, and for me that’s really important as I’ve got 20 lads who are all dying to play football again and are having their young lives put on hold.

"But so far so good everyone seems to be ok."

Have you or any of the lads struggled mentally through any of the lockdowns and how did this workshop help?

"I think it’s fair to say we’ve all struggled at some point in the last 12 months.

"But we’re a close group and we’ve stayed positive and kept busy which is part of the process of staying healthy mentally.

"There are certain things I learnt from the workshop such as recognising symptoms and how to combat these with breathing or with acting instantly so it definitely helped.

"I had seven or eight direct messages from some of the lads after saying that it was great so that’s good enough for me."

I believe they deliver this workshop for free? Do you think other clubs should access this for their players and management staff?

"It’s not quite free but I believe that someone somewhere has made a donation so that all North West Counties clubs can access it for free.

"Hats off to that person whoever you are.

"I got in touch with around 15 other clubs and managers the morning after and I think most will take them up on it.

"Others aren’t interested and that’s fine and their choice but it’s an opportunity to get some really good content into the lads and have a good laugh at the same time so why wouldn’t you do it?

"Could save a life."

Have any of your players opened up after the zoom call?

"I speak to the lads pretty regularly so I know they’re all alright and keeping themselves busy.

"Everyone seems to be looking at the positives now and excited to get back to normality."

"Yeah it’s massive to me.

"It’s something for about 25 years I didn’t know was a thing but then you start to see friends suffer and have a few bad experiences yourself and it’s like bang that feeling you’ve never felt before hits you hard.

"These lads know I’m always there for them at any time of the day so I’m confident if there ever was one of them struggling they’d pick up the phone.

"Healthy minds lead to healthy lifestyles and that’s all I want for these lads, and everyone for that matter.

"Always happy to speak to anyone who may be struggling.

"The stigma of men not speaking out has to stop and if it does then we will save lives."

Do you think more can be done to help support players/coaches mental health? If so what?

"I think the main thing is breaking down that stigma of men not opening up.

"Being afraid to look weak, or afraid to admit their struggling.

"And that fear often leads to men taking their own lives and if we can break that down and combat any issues before we get to that point then brilliant.

"Cliche but, it’s really ok to not be ok.

"I think in terms of doing more, this workshop was a great start and I think the FA and governing bodies can maybe look at incorporating more mental health workshops into the coaching badges along with first aid, making it easier for us to help players who may be struggling."

Is there anything the club are looking to do to continue to support the players?

"The clubs really family orientated and we all keep in regular contact.

"WhatsApp groups are good for that, everyone gets involved.

"Guys always posting random stuff on it to keep the lads entertained and that’s great, this weekend we had to guess the number of goals scored throughout the 3pm kick offs so that was a good laugh when it was getting to 4:40 and there was a few left in the running.

"Unfortunately the one person you don’t want to win it, won it in Jack Foster.

"He is insufferable with his United chat so that was the last thing we needed!

"But no, in all seriousness it’s great to see the lads having a laugh and all buzzing to get back whenever that may be.

"My message to all NWC clubs and clubs at all levels is to take mental health seriously.

"Make it compulsory for your lads to attend.

"Often the ones who are struggling and who do need it will be the first to say they’re ok and bat it off."