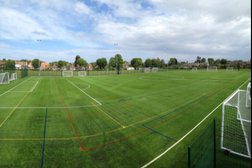 Newbury Forest in yet another comeback win!!!

Following on from last weeks comeback win over ACD united Newbury were coming into this game facing a tough test in Collier Row, a team who they had faced earlier in the season in the cup, Newbury prevailing on penalties in the fixture.

The previous meeting also being an equal affair, set up an intriguing tie which lived up to its hype.

The game started at a good pace, Newbury struggled to deal with a high press from Collier Row who put the Newbury defence under some pressure.

A few errors started to all creep into the game with Newbury living dangerously on the edge of their own box playing out from the back. Newbury almost caused there own downfall in the first 15 mins allowing the Collier Row forward to steal the ball however fire high and wide.

From the resulting pressure Collier Row forced a few corners and nearly took the lead following some slack marking however was to avail.

The game started to settle down and both teams battled for possession in the middle of the park, some strong challenges were put in which did not go unnoticed by the referee however no further action was taken to any players.

Collier Row then took the lead, Newbury allowing the right midfielder to much time and space to deliver a ball to the back post area between goalkeeper and centre back. The number 9 for Collier Row tucking home a smart finish past the helpless Bessex to make it 1-0.

Newbury reeling from this came back into the 1st half and started to dictate the play and create a few opportunities of their own, giving Omogiate a number of 1v1 with the Collie Row defenders who stood up to the task. Newbury kay have had a penalty in the 1st half after Omogiate went tumbling to the floor however the referee waved away.

A change up at half time after injury to goalkeeper Ollie Bessex sees back up Whoppa go in goal, Foster coming into centre back with Linsell pushing out to right back. Scotland coming on to the left of the attack with Stanley now more central.

Newbury started the 2nd half better controlling the tempo a little better and starting to get midfielders onto the ball.

Soon after the restart Joe Omogiate poked past the Collier Row goalkeeper following some good build up play from the midfield area, 1-1 with the game now opening up.

Not long after the Omogiate goal, Collier Row took back the lead following some build up play down the left leading to the forward looping a ball from the on rushing goalkeeper to make it 2-1.

Collier Row almost made it three with a header from a corner however somehow was kept at bay by Foster who managed to head over his own bar to keep Newbury in the game.

Newbury seemed to start mixing up there game now putting the Collier Row defenders on the back foot and having to deal with the pace of Scotland and Pobi whilst also have to contend with Omogiate who was on a mission to win today's game!

Omogiate soon had the ball in the net for the 2nd time on the day, again following some good direct passing from defence to midfield, Omogiate received the ball in the box and once again passed past the keeper to make it 2-2.

Newbury once again fell behind after the ball fell to the Collier Row midfielder on the edge of the box, firing into the corner of the net and help Collier Row take a 3-2 going into the last 20 minutes.

Newbury now really took hold of the game and started playing through the lines whilst also mixing up there play with some balls in behind the Collier Row defence.

After some build up play starting from the goalkeeper the ball made its way from defence to midfield and eventually to the edge of the box where Omogiate unleashed an unstoppable shot on off the far post to make it 3-3 and complete a hattrick. Newbury now full of belief continued there good football and built their way up the pitch once again.

Following some direct play from Foster and Nixon, Newbury won a corner in the 88th minute. With Davie and Omogiate standing over it, they played a short corner, Omogiate skipping past the defender who went to ground and firing across goal to the opportunist Scotland who fired into the roof of the net to which sent the Newbury players and fans into rapturous scenes. 4-3 to Newbury and a well deserved goal following the 2nd half performance.

Newbury now with only 5 minutes to play dropped back and dug in to take an very important 3 points and continue their fine run of form. Newbury yet again coming from behind to show their fighting spirit and put in a performance to be proud of.