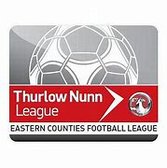 7 goal Thriller at the Oakside

Saturday afternoon saw Newbury host Halstead in what would be there 7th league game of the campaign.

It was a nightmare start for Newbury conceding a penalty just 2 mins into the first half of which Halstead capitalized on. It took a good half hour for Newbury to start to find their feet and get into the game. On the 31st min A great through ball from Steven Carvell put in Tyrell Holder who calmly slotted past the Halstead keeper bringing the hosts level.

The hosts were next to strike and take the lead 10 mins later after Tyrell Holder was brought down in the Halstead penalty area. Captain Freddy Anderson stepped up to the plate and fired to the right of the Halstead keeper sending him the wrong way.

Newbury would be happy to go into the half with the lead however this would not be the case as a mistaken pass from Dan Mckimm in the back line fell straight to the Halstead striker who then had a 1 vs 1 with Bessex and slotted home to bring the sides level. Halstead wasn't done there as they were awarded a free kick on the edge of the box, The ball was whipped in through a crowd of bodies a fumble by Bessex fell again straight to the Halstead striker who struck home 2 mins into injury time of which would be the last kick of the half.

The 2nd half changed the flow of the game as Newbury pushed and pushed for the equaliser. After a flurry of chances and a goal mouth scramble the equaliser finally came in the 75th min when good build up play and cross from the right found Carvell who drilled home. 3-3.

Newbury's tails were in the air and could smell a victory, a barrage of chance followed with Hasltead managing to clear their lines at every opportunity, On the odd occasion Halstead had there chances to maybe steal the show as they've done many times before, A cross to the back post found the Halstead striker who volleyed towards goal in the final minutes however much to the frustration of the Halstead team Bessex made himself big and kept out the attempt with a superb save keeping the game alive for Newbury.

On the 89th Minute Newbury found themselves attacking again and were awarded a corner for their efforts. All the Halstead team were back clinging on to what looked to be a a good draw away for the visitors. A great delivery into the area from Carvell found Courtney Justin at the back post who fired home putting Newbury back ahead on minutes before the end of game.

Halstead did try to push for an equaliser in the final minutes however the Newbury defence stood defiant and were not to be broken. Its back to winning ways for Newbury to move to 3rd in the league and now face an away trip to Holland in the league next Saturday.