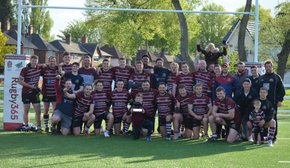 Leek lost out to a defiant Newcastle team that won with the last play of the game…. Report By Leek - Author John McDermott

Leek set their stall out early with a catch and drive on 2 minutes near to the Newcastle line but a knock on allowed Newcastle to clear. However, Sam Hunt was on the score sheet on 9 minutes after Jack Newton Taylor took a clearance kick, set the forwards up for some great continuity play from which Hunt took a pass to score near the posts. He then converted to hand Leek an early advantage at 7-0.
It was all Leek in the opening quarter and on 23 minutes the lead extended to 10-0 when Hunt kicked a penalty from a high tackle infringement.

However from the kick-off, Leek was penalised for interference at the catch in the air and the Newcastle fly half reduced the arrears to 10-3.
On 30 minutes, the Newcastle prop was yellow carded for an off the ball tackle and the resulting kick left Leek a lineout on Newcastle's 5 metre line. The catch and drive was excellent and Joe Newton Taylor crashed over for Leek's 2nd try. The conversion missed but Leek led 15-3 on 32 minutes.
A clearance kick from Leek on 39 minutes led to Newcastle's first try as the backs countered from right to left and into Leek's 22.Good work by the forwards then set up the overlap on the right for a good try. The conversion hit the bar but stayed out. 15-8 Leek. Newcastle pressed strongly in added time and had a chance at another penalty to end the half but the attempt went wide.

Newcastle started the 2nd half well and after Leek was penalised outside their own 22, good work again by the Castle forwards eventually
allowed the backs to work the ball wide right for the wing to score. The conversion missed but at 15-13 it was turning into a highly competitive match.
Leek hit back 4 minutes later with Leek's scrum dominant first and then Jack Newton Taylor broke the line and an inside pass to scrum half Ollie Drew saw the 9 score by the posts. Hunt converted and Leek led 22-13.
Leek turned the screw then on 53 minutes when another penalty gave them a lineout on the 5 metre line. This time Jake Bainbridge scored the try and with the conversion to come, it looked like the decisive moment in the match. However, Joel Booth was yellow carded after the try and although Hunt did convert to stretch the Leek lead to 29-13, they would play the next 10 minutes with their No.8 in the bin.
In that time, Newcastle scored 2 converted tries. The first from the kick off from which they had a penalty. The kick for the line on Leek's 22 led to great work by Newcastle's forwards as they took the Leek forwards on and worked a score by the posts. 29-20
.
3 minutes later, another Newcastle try as leek's defensive effort looked tired. The conversion was good and at 29-27 Leek needed to score next and with Booth back on the momentum changed again and on 72 minutes, a scrum penalty allowed Hunt to score the 3 points edging leek to 32-27.
With the game in the final 2 minutes Newcastle's determination gave them their unlikeliest try. A lineout on Leek's 22 had leek winning it but the tap back gave the hooker the chance to nudge it forward with his knee. Then the ball bounced awkwardly off another player and into Leek's in goal area and a Newcastle hand touched down as the 80 minute came. The conversion may well have won it but it failed from the left touch and the teams were all square at 32 all.
5 minutes of added time saw Leek pressing and George Hunt's break looked dangerous but an ankle tap stopped the move and extra time was needed.
It was 10 minutes a half knowing that on tries Newcastle led 5-4 so if no further score, it would be them to win the cup.

Newcastle suffered a yellow card 3 minutes in for slapping the ball from Drew's hand at the ruck as Leek pressed. The catch and drive was well defended though by Newcastle's forwards and they won a scrum. The clearance gave the ball back to Leek and the backs finally made a move that allowed Nick Palmer to race around the outside to score in the right corner with 9 minutes of extra time played. Sam Hunt couldn't find the conversion but at 37-32 Leek had edged in front. Newcastle had a penalty chance at the end of the half for not releasing but it went wide and with 10 minutes now remaining, it was still any side's game to win and lose.

2 minutes into the 2nd half and Joel Booth unluckily received his 2nd yellow for not moving quickly enough away from the ruck. The tap and go, now a familiar Newcastle tactic was stopped by a courageous Leek defence and when the Newcastle backs dropped the ball 10 metres from the Leek line, Nick Palmer kicked ahead twice to move the ball to Newcastle's 22. Good recovery by Newcastle then had them pressing in the Leek 22 on the right. Fantastic rugby in attack and defence as the clock ran down saw Joe Newton Taylor yellow carded with less than a minute to go. Again Newcastle tapped and the final attack through multiple ruck phases near the Leek line eventually led to the scrum half picking up and diving over by the posts.
The conversion was kicked, the referee blew for time and Leek had been edged out in a thriller by 37-39.

For the neutral, it must have been a superb spectacle for level 7 rugby as these 2 old foes played to exhaustion on the 4G Walsall pitch.
Well done to Newcastle for an inspired performance and hard luck to Leek, so close yet so far and the close season now to reflect and look forward to the new 2019/20 ahead.