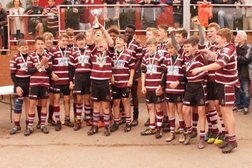 Once again we travelled away for a weekend of fun with the Under 13s and the Under 14's. We set off on Saturday morning at 7 o'Clock with two coaches collecting us to take us to Harlequins.Once parents and children had decided if they were posh enough for executive travel or could manage with budget line we were on our way......eventually!!

We had a great day once we were there with the kids enjoying a training session with somebody from Harlequins. They listen a lot more to a London gangster accent than the Welsh man and somebody who turned up from Worcester i.e. ME.

Any way we all left and watched a great game between Wasps and Gloucester where Gloucester were shown how to play the game!
Once we left there we went for something to eat and finally made it to the hotel to fight over rooms which we did but we all found beds in the end. Maybe not the right ones but its good to share!

We all made it for breakfast at different times of the day and stood in the queue which were very long but got grub eventually .Once we left for the game and off to the club that wont open.YES THEY WOULDN'T OPEN!! But its OK a burger van was turning up so we would be OK

We then played a game against a very strong team but with the conditions being unsuitable really and very hard and a lot of the kids not gong to bed early "I BLAME THE PARENTS" We weren't up for much . However the second half was much much better and the lads did Newcastle proud.

We set off after a few dodgy burgers and made it back to the club at around 4 pm. We all made it home unscathed and personally I was in bed for nine and slept through. I'm getting old..ER!!

All in all a great weekend and Nick and Tom have to be applauded for what they arranged so a big thank you to them.