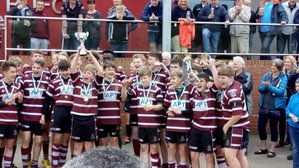 Massive performance and thoroughly deserved to lift the trophy, dominating every round.

The boys were given simple instructions, “dominate up front”
Boy did the Forwards deliver, they were immense and won us the game providing a solid platform to allow our speedy backs to do their thing with Alex Goodyear getting on the score sheet and Toby helping himself to another hat-trick.

Newcastle's 'Man of the Match' Alex MacDonald (nominated by Lichfield) had his kicking boots on, converting 3 from 4.

Could of and should have been a wider points gap with Newcastle having two try’s disallowed (Harry & Harrison), a further two held up (Alfie & Alex M) .

With little time left on the clock and the score at 26-0 we had the opportunity to make make numerous changes and every player got onto the pitch.

To be fair to Lichfield they are a quality side and they created a number of good chances with some trademark slick passing, thankfully our fullbacks Freddie and Evan were up to the challenge and both pulled off a number of fantastic try saving tackles.
Lichfield did get on the score sheet with 2 late tries of their own to make the final score 26-12.

Pretty sure these two teams will be battling it out again next season.

Well done lads, so so proud of the whole squad.