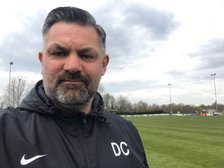 We gave a debut to 16 year old Ben Lester continuing our belief in the youth players coming up through our ranks..

"Newport Pagnell Town reserves travelled to Raunds Town today in our penultimate game of the season, and it had that end of season feel about it. We gave a debut to 16 year old Ben Lester continuing our belief in the youth players coming up through our ranks, and it was brilliant to have Connor Foreman back in the starting lineup after a long injury lay-off.

The heat was a factor today, but we started bright enough and camped in their half from the start and on the 15 minute mark it was a sublime chip from Connor to put us one up, but almost immediately Raunds could have equalised when a mix up at the back occurred, with the let off and halftime looming whilst we had most of the possession we just didn’t get going and credit to Raunds who marshalled the back line very well today, halftime 1-0 and the message was to up the quality and the tempo.

We came out brighter as did Raunds, we did make some more changes as the half progressed introducing all of our young bench, but as much as we puffed, Raunds stood resolute and in truth we did on the day lack that cutting edge and quality, three points and a clean sheet whilst not being at our best isn’t the end of the world, and whilst Raunds have had a difficult season, I’m sure they will have earned respect from others for not giving up and giving youth a chance.

We need to be better next week, up the Swans."