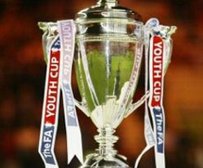 The young Swans crashed out of the FA Youth Cup

Bedfont were bigger, quicker and a class above as they cruised into the next round.

The young Swans crashed out of the FA Youth Cup after devastating six minute spell early in the first half that put Bedfont three nil up and in total control of the cup tie. There will be no complaints at the scoreline, Bedfont were bigger, quicker and a class above as they cruised into the next round.

Newport contained the score at three nil until half time. Any hopes of a second half recovery were dashed when Kelvin Adjei was dismissed four minutes after the restart. Newport suffered further woe when goalkeeper, Lewis Brewer, was forced off the pitch due to injury and had to be replaced by an outfield player.

However, the Swans should not be dismayed, they came up against a well drilled team and despite the scoreline, were not totally overawed. They never gave up, they wore their shirts with pride and showed tremendous character and spirit to keep playing to the bitter end. There has been good development in the lads’ progress and tough lessons will have been learnt with such a heavy defeat. Such lessons will make them better players and I have absolutly no doubt that they will bounce back to be a stronger side.