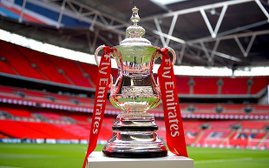 Swans fans supporter John Dyer is on an FA Cup adventure this season......Updated...now onto Carlise Utd !

Willen Road to Wembley.
Swans fan supporter John Dyer is on an FA Cup adventure this season where he is following the winning team through to the Final of the FA Cup. John start with the Swans vs Biggleswade Utd game back in August and has so far followed the winning team through to the 3rd Round Qualifier (next up for him is Egham Town vs St Albans in the 4th Round Qualifier). I will keep you updated on here where he is ending up on his adventure or simply just follow him via the link below to his 'Willen Road to Wembley' Blog.
The Intro
During the season 2014/2015, my beloved said to me that I should try a new project seeing as though I had just about exhausted all the rest of the football projects that were available. At the time of writing I have seventy-five football league grounds on my visited list, I had passed my Coaching qualifications, although I failed my A License assessment, I had successfully passed my Ref’s course and was entering my 16th season Officiating and I had followed West London finest since 1976, the season of Francis, Parkes, Bowles and Sexton, twenty-six of those years as a season ticket holder. And so it was suggested that I follow the winning team from the early preliminary rounds of the FA Cup in early August to the final in May. Why it took me a full season to think about I have no idea, maybe, just maybe that it was such a great idea, I refused to give kudos to the fact that my beloved could have such an idea. I would like it known here though, that one of the reasons I married her was the fact that she knew the Offside Law word for word, and she was probably right that I was unlikely to go to a FA Cup Final following QPR in the modern era. And so 6th August 2016, it began.
For more of Johns FA Cup adventure please follow link....