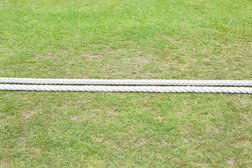 The strength of the cricket league continued to show this month with the Newton St Cyres team taking just 1 win from the 4 matches. However the bowling form from earlier in the season has continued with us bowling out 3 of the teams and one wicket short of a full haul, with Kenn holding on to be 213 for 9 wickets. This has meant value bowling points has kept us well ahead of Buckland and South Brent in the league position.
The one win of the month came at the expense of South Brent, with us scoring 202 all out and then bowling them all out for 161. The figures of the day went to Dave Church with a well-deserved 6 for 26. He backed this up with 33 runs with the bat, which together with Tom Sunderland (49) ensured a good total was put on the board.
The other matches were against 3 very strong teams (Ashburton, Kenn and Shaldon), against which we just could not match with the bat. However some bowling of note goes to Martin Pearce getting 4 wickets for 48 against Ashburton, Jack Withers 4 for 59 against Shaldon and Tom Dowle 3 for 36 against Kenn.
The last weekend also saw us take part in a very good 20 over tournament put on by Mike Foan of Cheriton Fitzpaine, which saw some great cricket played in good spirit, with Rackenford eventually taking the trophy. With the bar and barbeque put on by Cheriton it ensured a great climax to the finals day and a good fun family day out, which we hope will become an annual event.
With just 3 league matches left the league positions are taking shape, but there is still a chance for us to catch Stokeinteignhead (currently 28 points ahead of us, with 20 points possible from a win). Following that the team will then go on a mini weekend tour to Northern France to finish the outdoor season off and get ready for the indoor season and winter nets.
Share via
FacebookTwitter
https://www.pitchero.com/clubs
Recent news