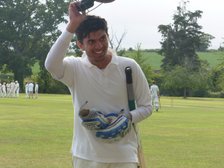 Usman gets a ton

It’s been a good start to the season for the cricket team winning all 3 pre-season friendlies against strong opposition, and setting us up well for the league ahead. We were also briefly top equal in the league with a maximum 20 points from our first league game. Unfortunately a loss in the second league game to Exwick put a stop to the run of victories, but a good month never-the-less.
The friendly season started with a 20 over game at home against Bridford, with them putting on a respectable 146 for 4 wickets. However our batsman showed the benefits of winter nets with Uzman Manazir scoring the first 50 of the season (scoring 61), and Leighton Dayman, showing his form with a nice knock for 34 .This saw Newton St Cyres hit the runs with 8 wickets to spare.
The next match was against Clyst Hydon – always a strong team. Some great bowling and fielding resulted in bowling the opposition out for a slightly under par 142. We managed to chase down the runs with 11 balls remaining including good scores from Usman Manazir (38) and Tom Sunderland (30 not out).
Our run of success in the pre-season friendlies continued at Bradninch. Our hosts got off to a fantastic start, ruthlessly punishing any error in line or length. Despite them being 143/2 at drinks our spirit remained good and soon after the introduction of Paul McCutchion (3/10) and Chris Collyer (3/20) to the attack, their innings was wrapped up on 194 all out. A solid batting performance throughout included Chris Wade recording his highest score for NSCCC, of 34, and concluded when Martin Pearce (44 not out) struck the winning runs, with 10 balls remaining.
The league season kicked off against Stokeinteignhead and batting first we set a very good total of 255/6 with Usman Manazir scoring his maiden century (138), and strong performances throughout the team. In reply Stokeinteignhead were bowled out for 92. The wickets were shared around between the 4 bowlers used, including Joe Moretta (3/5) and Tom Dowle (3/33).
Unfortunately in mid-May, the unbeaten start to the season come to an abrupt end. A new Wednesday evening cup format at Cheriton Fitzpaine, saw us try and bat in constant rain on a wicket that started sticky and ended as a mud bath. We narrowly missed out to Yeoford in the first of our matches in this 20 over series.
The second league game saw us travel to Exwick CC where we came off second best yet again. Batting first on a tricky wicket we started well, thanks to the application shown by our top 3 (Chris Collyer, Leighton Dayman and Dave Church) and just after drinks had a platform laid of 100/2 and enough overs left to be within striking distance of posting another 200+ score. However, some mistimed shots and the up and down nature of the pitch saw us subside to 134 all out. After tea we ran into two very good batsmen and our hosts chased down the total with great style and without losing a wicket.
Despite the losses at the end, it shows that we have a good team for the season ahead, and we look forward to some tough but exciting matches over the next few weeks, including Kenn, Ashburton and newcomers to the league, South Brent. We are always looking for new players so if you are interested in having a game or coming to a practice please get in contact. (paulmccutchion@hotmail.com).
Share via
FacebookTwitter
https://www.pitchero.com/clubs
Recent news