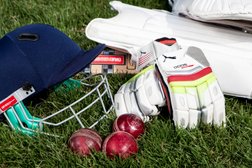 Phillips century too much for Newton

A disappointing all round display saw Newton slump to a heavy defeat against in-form Topsham.
With Newton's pitch being unavailable for the day, the match was switched to Cheriton Fitzpaine's ground. Heavy overnight and morning showers meant that play started over two hours late and turned the game into a 24 overs per side match.
This didn't affect Mark Phillips however, as coming in at number 3 he made use of the short boundary on one side of the wicket and the bowler's errant line to smash an excellent 108 off 58 balls. Ably supported by Callum Treleaven (40) they laid the foundation for a formidable score. Skipper Martin Pearce with 4-31 was the pick of the Newton attack.
In reply, Newton couldn't keep up with the rate from the start, with Ross Treleaven (3-19) being particularly economical. Leighton Dayman hit 2 sixes in one over but after he fell for 27 there was only going to be one winner. Phillips (2-16) bowled five rapid overs to prove he isn't just a batsman and skipper Edd Kirby cleaned up the tail with 4-7.