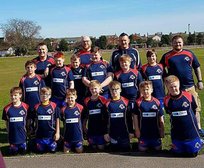 On the back of 3 wins the storm boys traveled to face Pilkington Recs in a confident mood.
Storm started the game in brilliant style putting pressure on the pilks line from the start. Eventually scoring through Jamie sergison who collected Morgan Browns cross field kick. The boys then stepped up in defense and with fast line speed forced pilks into losing the ball. This defensive attitude accompanied by strong running and great attacking organisation allowed storm to build a 16-0 lead through further tries from Sam Williams, Luke Ellison and Nathan Burton. (If somebody had remembered to bring a kicking tee it might have been more).
Talk at halftime was about trying to maintain our defense and not let the opposition over our line. With this in their minds the lads continued to work hard in defense and managed to cross for 2 further tries from Morgan Brown and Ethan Marshall both converted via drop goals from the 2 Nathans (Burton and Logan). A defensive lapse left storm short on the blind side which allowed pilks to cross for an unconverted try. The disappointment in conceeding a try spurred the team on to cross for 3 further tries from Morgan Brown (2 tries) and Harvey Burgess, 2 of these converted by Morgan Brown and Logan Bloxham.

Its been an awesome start to the season and the confidence coming through from all the players is great. Keep up the hard work in training.
WORK HARD,
TRAIN HARD,
PLAY HARDER,
LIVE EASY.