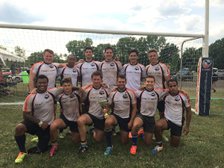 This past weekend saw NYRC Men's first side competing in a tough bracket. However, the team was ready to play after receiving their brand new jerseys from sponsor true[X] media. The first game against the CT Yankees was difficult with little NY possession however we were able to pull out the win with a try in the last play. The second game against Monmouth came more easily as the NY team became accustomed to one another. Defensive alignment improved and we were able to capitalize on some key Monmouth mistakes. After winning our pool, NYRC was given a bye for the quarter finals and set to take on the 2nd ranked team in Empire GU standings, Brooklyn, in the semis. The game started off with some good rugby from both sides but early in the second half NYRC had pulled ahead giving some of our newer players an opportunity on the field. The finals promised to be a tough match against 1st ranked Princeton. The first half showcased some great rugby by both sides with NYRC down by 2 points at the half-time whistle. Kicking off in the second half, NY was able to control the game and continued the pressure all the way until the final whistle ending the match with a clear victory over a previously undefeated Princeton.
NYRC Men look to continue this momentum on 7/12 in Blazing 7's in NJ.
Share via
FacebookTwitter
https://www.pitchero.com/clubs
Recent news