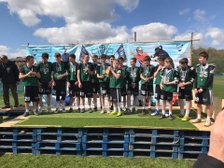 By now you will be aware that after a brilliant season, where we lost only 3 games (2 stupidly) and based on average points per game came second to Cheadle Hulme, we won the Centurion Cup at FLAGS 2017. Actually we didn’t just win it, we smashed it. SMASHED IT!
Let’s not forget our run to the final started on a very cold foggy morning where we met our usual rivals of Stockport (Brooklands). They were comprehensively blown away early doors after a great start. We wanted that which was proven by being out in that weather warming up.
After that we met tournament favourites, Cheadle Hulme. Our best fighting performance of the season on a foul day, on a pudding pitch saw us beat them in a very close match. Understandably this then installed us as favourites and it was this that unnerved me, but not the lads. We blew Sheffield away again early on in the Semi and never looked back.
So, onto the final. Some of us on the bus, some getting there by car, the green machine gathered. The weather set fair, never has it been so good in Rochdale, and the lads looked calm in readiness for the tie against a Timperley side we’d only played on the opening day of the season, as such they were an unknown quantity. So, what did we decide to do again? Blow them away in the first 4 minutes – 4-0 in fact. Our best lacrosse performance of the season. Not a bad place to do that, The Final.
Now, I haven’t got the memory that Phil has for moves that led to goals, and I’m only going to name a few individuals, primarily for their scoring and assist exploits, but this was a squad performance. From the players on the pitch, those waiting to come on when required, the coaches; Abs, Harrison the irrepressible bag of nerves, Ali, and all the parents and supporters – this was a team effort. It was great to see Nick Chartres and Dave coming to watch. Before I break down the scoring, a few notable comments; Miles for his performance, particularly from Q2 onwards with some great saves and LT; sent off more in the final than he has been all season (2 fair, one harsh in my view). Finally the MVP could have been any of the midfield but Aaron rightly shaded it.
Q1
6 – 2. Goals from Sam and Jake set us on our way and Aaron only managed 3. There’s some confusion whether Louis A scored the other as we’re not sure if it deflected off Alex – one to be discussed by the two of them over a beer sometime. Assists came from Aaron and Jake.
Q2
3 – 1 (9-3). Goals came from Sam, Alex (definitely) and Jake. Aaron, what happened? Oh an assist. Good man.
Q3
4 – 0 (13-3). Boringly (how good to be able to say that), goals came from Sam, Jake, Aaron and a brilliant team goal which started with Miles being checked but retaining the ball. He passed to Aria who strode forward with the long pole swinging as only he can. Louis A made himself available to receive the ball which he duly did and bore down on goal before passing unselfishly to Alex who after a slight sidestep put the finishing touches to a great fast break. A coaches dream
Q4
4 – 0 (17-3) and even I started to lose the nerves. Continuing to put final nails in the coffin, goals came from Louis, Sam and Aaron. Assists from Ben and Louis.
As the final whistle went it was great to see the camaraderie, from both clubs plus Ewan Timms and Matt Anderson who were as excited as the lads.
So, all in all a satisfactory end to the season. Understatement. I’m buzzing still.
Thank you from Norbury to Cheadle Lacrosse club. This season’s partnership has been a brilliant success and whilst the boys will come up against each other in the future they will remember this season with fondness and genuine friendships have been made. Until NLC/Cheadle matches of course.
See you all at training soon, the Americans are coming.
Pictures will be on our Flickr page – details will be sent in due course
Thanks all, it's been a blast.
Share via
FacebookTwitter
https://www.pitchero.com/clubs
Recent news