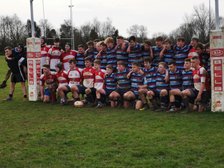 Fantastic game today, the lads were fired up and eager which resulted in a early try from Bailey on his debut which he then converted. This was followed by tries from Dan and Finn both converted by Bailey to finish the first half 21 nil up!
The second half was more of the same, commited, passionate play from all of them. Dylan scored and Harry Newman upped a gear and scored from the 22! Wellingborough aided by 5 of our players finished the second half with 2 unconverted tries for a final score of 10-31.
Super proud of the lads putting in a shift, great teamwork, excellent passing down the line and awesome defence work. Man of the match goes to Finn, great to have him back putting in the tackles and great defence and handling. More of the same for next week!
Share via
FacebookTwitter
https://www.pitchero.com/clubs
Recent news