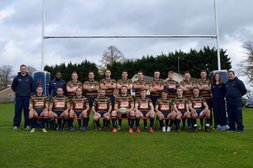 The teams cancelled each other out with good defence in the opening exchanges and it took almost half an hour before there was a score.
The visitors went ahead with a penalty and within two minutes Scouts hit back when Kelvin Dwumfuo raced down the left wing and fed inside to supporting prop Emilio Giron-Walsh who touched down. Adam Frost banged over the conversion and added a penalty before the break.
Several injuries were interrupting the flow of the game but ten minutes into the second half a break around the blindside of a scrum allowed Forests winger to go over in the corner. The conversion was missed and it took a further indiscretion from Scouts to lose the lead when they were penalised for going in at the side in front of the sticks.
The home side were then hit with another blow. In their attempt to regain the lead Scouts were attacking in the Forest 22 but an interception allowed Forest to race the full length for a soft seven points.
Scouts eventually hit back and replacement Lewis Underwood scored out wide when he had plenty of time to run in closer to the posts and the kick was missed.
Forest stole the losing bonus point , which would have been the least they deserved, from their hosts at the death when a chip over the top was touched down just short of the dead ball line.
Share via
FacebookTwitter
https://www.pitchero.com/clubs
Recent news