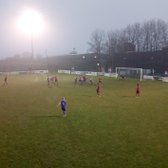 Today we made the short trip to Daventry in the league.

The first half was very open, Dom Roggero produced a number of fine saves for us denying Creaney, Fitzgerald and Harris. The save to Deny Fitzgerald in particular was absolutely top class. We also created chances, O’Reilly was denied by a top save by O'Connor and Rhys Kelly headed inches wide from an Emery corner.

Second half was just as open, O'Reilly was denied on the line by a good header by Ross Harris and O'Connor produced another fine save to deny Kelly from the resulting corner. Dom was also called into action, saving at Orosz's feet when he was through on goal.

With 15 to go Daventry broke the deadlock, McGowan pouncing on a loose ball in the box to poke home.

We pushed for a goal but were denied. It was a decent performance from the lads which we will take into Saturdays trip to Chenecks.