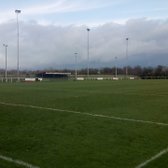 Sileby came away empty handed in a one sided game at Sergeant's Lawn as Rothwell won 4-1 in the UCL Premier Division.

Rothwell made the brighter start and took the lead on 8 minutes, with a near post header from a corner.

Sileby came into the game more as the half wore on, with Bayley Leslie and Khalidu Sesay having shots blocked. 1-0 half time.

Rothwell began the second half in the same way as the first and made it 2-0 with a well worked team goal. It was 3 just a few minutes later, before substitute Eliot O'Reilly pulled a goal back with a lovely curling effort to begin the comeback.

However it didn't last long as Rothwell restored their 3 goal advantage just a minute later. Dom Roggero made a number of fine saves for Sileby to keep the score down.

Sileby return to action on Tuesday at home to Leicester Nirvana