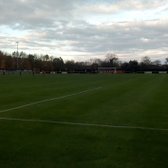 Rangers battle back from 3 down to draw

Sileby came back from 3-0 down in the last 20 minutes to draw Matt Clarke and Paul Brackwell's first game in joint charge of the club.

First half was all Sleaford, player manager Jamie Shaw opening the scoring. Their second goal was a piece of class, beautiful volley inside the box. We were lucky to only be 2 down at half time.

3-0 early in the second half and it's game over.

Harrison Winters grabs one back for us with a tiny bit of help from their keeper. This gave us a lot of confidence and it was 3-2 minutes later, Akanbi heading in a fantastic Scott Sandy cross. Akanbi then completed the comeback with a nice finish inside the area.

There was a late red card for their defender, pulling down Scott Sandy on the edge of the box when he was last man. Ref gave a penalty, only for the linesman to convince him it was outside the box.