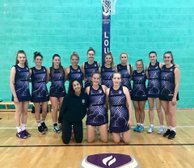 Second Victory in Division 1 for Seniors

6:30 alarms on a Sunday morning should be illegal(!!), however, the Storm girls were up and raring to go for their 2nd game of this year's Regional League against Nottingham Sirens. Our opponents had a tightly contested game previously against Charnwood, so we knew that they were going to be coming out fighting to get their 1st win of the season. After a thorough warm up and pre-game focus from Coach Nic, we were ready to hit the court.

Off the blocks, Storm had a fabulous start to the game. Before the start, Coach Nic gave us some very important advice from Stacey "don’t lose", which probably instilled some fear, but gave us a strong lead. Megan absolutely owned the circle at GS, utilising her wide range of tricks and accurate shooting to keep the defenders guessing. In the defensive end, Izzie picked off lots of interceptions and made it incredibly difficult for any play making opportunities by Sirens, particularly being so rangey around the circle edge. An awesome start, gave us a 19-7 goal lead after 15 minutes. Phew!

The 2nd quarter saw more of a flow to the game, our Vice Captain Yas held strong in the attacking position, being both clinical with some feeds that make you go ‘oooooooo!!!!’ and consistently getting free from two defenders for effective 1st phase centre passes. Again, on the other side of the court, QUEEN silent assassin Jordan, and clean as ever was on her A game and was able to get some faaaabulous intercepts. However, as clean as Jordan was, Clare got a caution from the umpire for persistent contact… booooooo, naughty! Despite not being on the umpire’s side, we extended our lead to 36-16.

Some changes made in the second quarter made by Coach Nic, the fresh legs gave us an extra gear. We were AWESOME in this quarter. Etilly’s holding and shooting was incredible and the feeders were able to see our dangerous GS for some rangey feeds, which were coming in from all positions on the court! Amy was a workhorse in attack, cutting the circle up consistently and was able to shoot from anywhere, and let’s not forget all of her intercepts coming through the court, too! End of 3rd quarter time gave us an amazing 30 goal lead of 55-23. Woo!

Finally, the last quarter and last push of the game to really make our mark on this game. The versatile Sam had an excellent game at WD, tips, intercepts everywhere and bringing the ball beautifully down the court was an absolute delight to watch. The final score of the game was 67-33, an amazing 34 goal difference to send a message that we mean business in this league! POM goes to our captain fantastic Kimmy, where her go-go gadget arms collected the most amazing and INSPIRING intercepts, whoever they put against her, she was able to dominate. Well deserved, Kimmy!!!!!

We go again next week against Hinckley Hurricanes, where we will all be tucked up in bed on a Saturday night for another 6:30am start. It’s worth it to play with these legends!

A note from Captain Kim...
As our Clare has mentioned, we're not sure if she’s in Nic’s good books for getting on the umpires naughty list however this didn’t impact her performance! As always Clare’s court craft and quality was plain to see with her pinpoint feeds. I'm not sure what that girl eats for breakfast however with her relentless energy, I think we all need to be getting to the Drakeford’s at 6am to get involved!