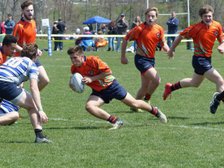 Our North Bay Boys were one of five teams to join the top fifty last week, as explained in this FloRugby article. Described as "undefeated in Maryland," our boys have defeated strong single-school teams, Loyola and Calvert Hall, and every club team they've played in their matrix including a decisive 76-19 win over The MD Exiles.
This week their rank was improved from 41 to 33 following a strong performance at the Maryland International Rugby Festival where they beat Mt. St. Joe's and Howard County and held their own against Fort Hunt (#3) in a tough match during which Bobby Zvitkovitz scored a try and converted it with a kick from the far left.
Share via
FacebookTwitter
https://www.pitchero.com/clubs
Recent news