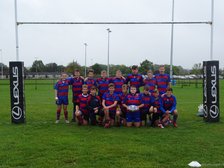 Some Great Tries for the U13s at Home

Bridgwater welcomed to Oaklands for the first time

The U13s welcomed Bridgwater & Albion to Oaklands for the first time and they were able to use Pitch 3. With over 40 boys ready to play, four quarters of fifteen minutes were played, all of them keenly contested.

North Bristol's increased organisation gave them the edge but it was a tough fought first quarter. Matthew started the scoring with a powerful surge before Devan, in the centre, glided over to leave the score 2-0 at the end of the first fifteen minutes.

Both teams rung the changes with a completely new team wearing the red and blue. It was great to see new player, Ibrahim, in action for the first time. The nippy back made some excellent tackles and looked dangerous with the ball in hand. He looks like a great addition to the squad. A couple of his tackles stopped B&A in their tracks and forced turnovers which North Bristol could capitalise on. Fletcher powered through for a score and Morgan was on the scoreboard soon afterwards after a super pass from George P. The ball was being recycled well and good decisions were being made by the team as a whole which led to scores from Will and Leon as the first half ended 6-0.

Bridgwater started the third quarter well and earned themselves a deserved score. This sprung North Bristol back into action, but despite excellent pressure some "white line fever" took over and chances were spurned. However as the quarter neared its conclusion James was able to sprint over and it was 7-1.

The final quarter saw North Bristol play their best rugby of the morning. Cobey slotted into scrum-half and picked the pace of the game up and with this extra boost, Bridgwater were struggling to keep up. Morgan scored his second try after an outstanding offload from skipper Bobby and Cobey was able to score after a great support line. Ted at full back looked dangerous and his break saw him score before Morgan claimed his hat-trick try. The final score came to Fletcher who was his usual powerful self bringing the curtain down on a 12-1 win which was a lot tougher than the score suggests.

Big thanks to B&A for travelling up the M5. Next week the U13s look forward to welcoming Sidcup, on their Bristol Tour.