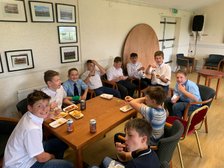 Yay, the first fixture was here and predictably it was raining!

The boys first fixture as under 13's we knew would be tough, so much to think about and try and put into practice, not the least the pitch being so much bigger....

However they did us proud, some fantastic performances, awesome passing and movement of the ball and the scrums - Thank you Ken scrum coach, as I don't think we lost one! Fitness began to be a defining factor as the game progressed, with North looking the fresher players.

Overall it was the spirit in which they played the game that made us all proud and they were deserving of the victory.