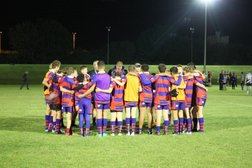 U14s fantastic win under the lights against Kingswood

Tonight was the first game for the U14s under the lights at home to Kingswood. The boys were buzzing in what turned out to be a great team performance.

Within the first part of the game, Kingswood managed to run through our defence and score the first try. Soon after Chris made a fantastic try saving tackle in his position as full-back. Curtis produced a strong drive, the ball popped out to Bobby who made a fabulous run before offloading the ball to Morgan who sprinted through. Unfortunately, Steve thought he was 21 again trying to keep up with Morgan and hurt himself meaning he could not carry on refereeing, so thanks to the Kingswood coach who stepped in and did a very good job.

North battled on as the Kingswood team came at us hard probing our defence, but despite some really good tackles from James, Cobey, Max and many other team members we could not keep them from scoring again. However, We were able to get the ball over the try line shortly after with Diego producing a lovely pass out to Bobby who ran more than half the pitch to score.

Morgan and Bobby combined managed to take down their fast player, preventing him from being able to score again.

Kingswood kept coming hard at us and looked to be through, but Chris again at full back put in an amazing tackle stopping them, this massively changed the flow of the game. Our defence worked hard tonight and kept them out from scoring with many phases of tackling, but the ball went loose after a really good tackle from Matthew, allowing us to clear the ball. Ben B brilliantly stripped the ball to get the ball back and after some excellent rucking from Louie, Evan and Curtis, the ball was fed out to Ted who put Morgan through to score again.

Bobby soon scored a few minutes later after picking up a loose ball on the half way line before Ben B, who had a brilliant half, scored from excellent work from the two Wills in the ruck. Also the kicking was much improved today, this was helped with many of the tries being scored near or under the posts.

Within the first minute of the second half, Archie burst through who then combined really well with Leon before offloading to Tom who burst through to score. Soon after Tom picked then up a loose ball on the half way line to run through with great speed to score again. Kingswood looked to have scored a certain try, but Fletcher showed that you should never give up with an amazing tackle in the corner. We battled to keep them out, but they did score in the corner during the next phase.

By this time Kingswood were unfortunately tiring and we were able to take full advantage of this. The combination passing was excellent today, with Ellis driving at the defence; Leon, Devan, Cobey and George P passing the ball around brilliantly allowing Tom to score a four further tries with Kingswood unable to respond due to his pace and power.

Fletcher scored after good runs from Morgan, Curtis and the final pass from Leon

This was an excellent team performance with some really good build up play allowing the fast players to score the tries. The forwards were brilliant today getting into the rucks really quickly. An amazing 12 tries and 8 conversions, brilliant performance, well played boys.

A big thanks to Jack who came down to support and helping the team while recovering from injury.