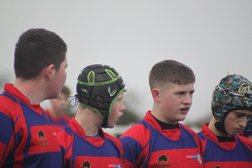 U14 lose tight game at home to Chew Valley

We welcomed a strong Chew Valley side on a blustery cold wintery morning.

Straight from the kick off Chew pushed us back, Evan making a couple of excellent tackles and although we turned them over, they managed to quickly came back at us to open the scoring.

We eventually started to wake up and pushed Chew back into their half, the forwards winning the ball in the rucks. Will drove them back and managed to get the ball passed out to James who sprinted down the wing but couldn't quite get to the line. With a brilliant turnover on the half way line we sent the ball out to Ollie who kicked it through. More great work pushed Will close to the try line but was unlucky to be held up. The resulting scrum allowed Matthew to pick up and drive over the line to score our opening try.

In our half, Diego received the ball and drove hard at their defence, Bobby took over, finding space to sprint down their wing to score our second. Straight from the kick off, Matthew picked up and passed out to Jack and just like the previous try, he found space and speed to sprint down the wing to get our third.

Very strong half with lots of good tackles and teamwork.

The second half had us kicking into the wind which we struggled to cope with, especially with our passing game where not many passes found their targets.

Cobey flew out of the blocks with a great tackle on one of Chews bigger players, but we conceded two tries in quick succession, both with sprints down the wing, matching our tries in the first half.

Morgan made a good run down the wing, but their excellent defence gave us very little space. Leon continued his good form with good tackles and ruck speed. Gene also made some strong tackles out on the wing to stop them coming at us.

Matthew had to come off after bravely diving into a tackle before taking boot to the eye (words provided by guest editor Matthew). Ted also came off after taking a knock after strongly tackling the Chew players. Strong forward play from Chew allowed them to push over to take the lead despite excellent tackles from Archie, Devan and Ellis.

Morgan sprinted through the centre and almost got through, then moments later pirouetting on the wing to get past a couple tackles, but we could not get through the strong defence.

A tough game today against a very well drilled Chew Valley side. An excellent first half performance after conceding an early try, but unfortunately we struggled during the second half which saw us running into the wind.

Sad to see Fletcher with yet another injury, hopefully his luck will change soon. Diego had an excellent game today, working hard to drive at the defence and making some great tackles against a team where he had a nasty injury in the reverse fixture a few months ago, well done Diego.

Next up is our semi-final in the plate.