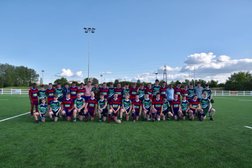 Man of the Match, Will, steals show with hat-trick of tries

North welcomed Galway touring team, Oughterard, to Oaklands for our final game of the 18/19 season and our final game as Under 15’s. The visitors brought a stiff breeze with them from across the Irish Sea and there was enough of a chill in the air to remind us that Summer had yet to arrive as the teams lined up.

The visitors kicked off towards the Meadows end to get the match underway and the initial exchanges were evenly balanced with neither side gaining an edge. Then on 12 minutes, Oughterard spilled possession in the North 22; quick as a flash, Will, playing at scrum-half, seized the ball and scampered through the field to touch down under the posts for the opening score. James added the extras and North led 7-0.

Six minutes later, Will added his and North’s second try following a smart cross field right to left move which involved a strong break by Ollie and support by Luke. The conversion was missed; 12-0 to North.

On 22 minutes, Alfie ran onto a smart kick through by Tom Bennett to add North’s third try and it looked like the visitors’ long journey was taking its toll. 17-0.

However, the visitors responded and added two excellent team tries in the last two minutes of the half, one converted, to leave the half-time score 17-12 to the home side.

James kicked off to restart the second half and within a minute, the visitors had crossed over for a converted try to leave North trailing for the first time, 17-19.

Oughterard countered from the restart and were gaining a foothold in the North half when Tom Bennett intercepted a pass on his own 10m line and cantered over under the posts to leave the easiest of conversions, which James put over to put North back in front 24-19.

North were now gaining the ascendancy as the toll of the travelling began to show on the visitors. Three further tries between the fifth and 18th minute (two converted) gave North an unassailable lead 43-19, to leave the match over as a contest. The first of these was scored by Ollie, after Man of the Match, Will had made a brilliant steal to set up a typical rhinoceros charge by Jamie deep into enemy territory, supported by George and Mike, who fed the final pass to Ollie. Jamie himself charged over on ten minutes and then Will, with support from Joe Brake and George, completed his hat-trick on 18 minutes.

The visitors battled on gamely and in the final 10 minutes both teams exchanged four tries between them to leave the final score 55-33, Max the scorer of North’s two; the final one followed a pick up and drive from the base of the scrum by Max who fed Will who cruised to the line and then unselfishly passed back to Max to dive over.

This was an excellent sporting contest, played in good spirit against a touring team who have become good friends of North Bristol. Unfortunately, they travelled short of a few players, so special thanks to Dougie, Jamie, Chris and Riley for their sportsmanship in guesting for the visitors.

After a slow start, the match turned into a good demonstration of strong running rugby and, despite the flattering score line, was an evenly matched contest, decided, it could be argued, by two tries against the run of play. Oughterard had no answer to North’s powerful pack, but their backs, especially their outside-centre, posed problems for the home defence.

Well done to coach Julian for leading the team to their second consecutive victory under his charge and hopefully he can maintain his unbeaten run when we return as U16s in September 2019.

Finally, thanks again to the players for providing tremendous entertainment over the season and for giving their best efforts in every game