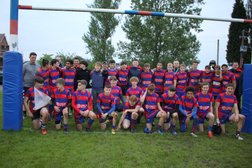 U15 Fantastic second half display despite defeat to St Brendans

The final game of this short season was a Friday night game at home under the flood lights against a very good St Brendans side. We welcomed a couple of new players, Spencer and Diego who have joined the team over the past few weeks and have both fitted in really well with the rest of the squad.

The first half started well with Spencer picking up the ball and made some good ground, but struggled to break down a stubborn defence. Max and Ellis tackled hard, keeping waves of attack away from our try line. Ollie then stopped an almost certain try with great determination on the wing.

However, soon enough St Brendan's opened the scoring, getting through the defence. We were on the back foot, Cullen, Ellis, Fletcher and Joel with big tackles; Fletcher doing his usual trick of stealing the ball in the ruck.

A second St Brendan's try soon followed just before we then started to push them back into their 22 with lots of possession and the forwards banging on the door, Cobey moving the ball quickly and the boys trying to drive over the line. St Brendans almost broke away before Morgan stopped the potential attack on the wing.

Oscar, Will C and Pete put in so many tackles before we conceded again. We had lots of possession of the ball, but maybe guilty of not making the correct choices with the numerous attacks we had becoming too one dimensional and not getting the ball down the lines, instead continuously trying to drive through a solid St Brendans wall. However, some really good work from Cobey again, and Will W almost got us through.

Despite being on the attack for a good while, they hit us on the counter to score again; and quickly followed up with 3 more tries.

St Brendans scored early on in the second half and we were starting to get worried for the boys. However, what followed was amazing team work and great determination by the whole squad, we also started to move the ball better down the line.

Tom turned the ball over in the ruck before driving hard at their defence. A fast pass from Cobey into Ollie and he was able to score our first try of the night. Unfortunately Spencer's night was finished, coming off with a shoulder injury, get well soon.

We were under some pressure, but from a loose kick Bobby expertly picked up the ball and ran the whole length of the pitch to score. Everyone was tackling hard now, missing fewer tackles as the game went on. Oscar, Ollie and Bobby all making last ditch tackles to keep them out.

Under pressure again, a loose pass was picked up by Morgan and with another pitch long lung busting run, raced through to score our 3rd.

The last 15 minutes was very even both teams going at each other with James making some good tackles before coming off injured. Tom made a couple of try saving tackles; also with Louie, Fletcher and Devan all working hard for the team.

Archie started to make some really strong runs, high in confidence after last weeks hat trick of tries making him our top try scorer for our short season. Curtis and Max hit them hard with some fierce tackles, and Evan enjoying himself with his usual brilliant rucking.

A brilliant resilient second half display, which we won 21-5. Every player performed with great confidence and full of heart, working hard for each other. It has been a short season, but the boys will have learnt a lot from each game, ready for next season.

Good luck to Will C who is leaving the team today as he is moving away, he has been a very valued member of the squad. Well done to George P for being voted Vice-Captain, alongside Bobby who will continue his fantastic job as Captain.

Thanks very much to all the coaches who have put in a massive effort to help the boys, and cannot wait until next season.