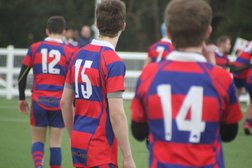 Much improved Yatton push North all the way

North ease to win on home turf in squally conditions

Good friends Yatton were the visitors to Oaklands on yet another blustery Sunday morning where running rugby was almost impossible due to the conditions. With Matt and Joe Bees guesting for the visitors, James kicked off towards the Meadows to start the match into the very stiff wind. Yatton enjoyed the early territorial advantage until the ninth minute, when Finn, somewhat against the run of play, crossed for the opening score. The conversion was missed leaving North to lead 5-0.

Play ebbed and flowed with Yatton lacking the cutting edge to make the most of the wind advantage. On 16 minutes a massive wind assisted clearance kick from the Yatton 22, coming down with snow on it, was spectacularly caught by Tom Bullock behind North’s 10m line; Tom set off on the counter attack, deep into Yatton’s half, setting up clean second phase ball, from which a neat exchange of passes provided the opening for George to cross over for a second unconverted try; 10-0 to North.

Two minutes later, Yatton intercepted a North pass on halfway to run in for their first try which was converted; 10-7. A further three minutes later, Luke scampered over under the posts to leave the easiest of conversions;17-7, which is how the first half finished.

For the second half, George, Riley and Joe Meads switched over to the visitors who now had to face into the wind, with Matt and Joe Bees returning to North colours. Few chances were being created and it took a bit of inspiration from Mike to spark some life into the North attack, when on 14 minutes, having managed to keep a touch kick in play, he put a deft chip kick into touch deep into Yatton territory, leaving the visitors to contend a defensive line-out on their own 22. North’s pressure on the ensuing throw-in allowed the home side to turnover possession and then work the ball to Matt on the right wing, who sped over to touch down. 22-7 to North.

Yatton managed to pull a converted try back on 26 minutes but Panashe added a fifth try for North wide in the left corner as the final whistle blew. Final score 27-14.

Despite the turbulent conditions, this was a well contested match against much improved opposition. Both sides showed great endeavour and should be commended for their efforts.